Din feel like going school today cos results will be out later the day. But staying at home with nothing to do is too unbearable for me either. So I thought I of visiting Punggol and also see what Pulau Serangoon is like. Perhaps it is an uninhabited island full of wildlife? We shall see later. 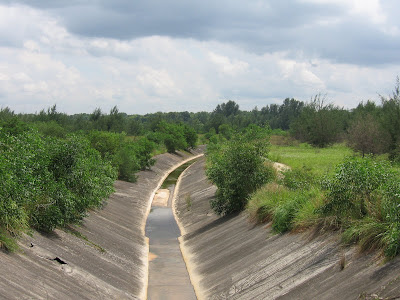 Punggol is still largely undeveloped even though the LRT system had already been built around the uninhabitable parts. In fact for those living nearby and learning driving from private instructors, this is the place they will bring them for initial test driving cos of the low traffic. 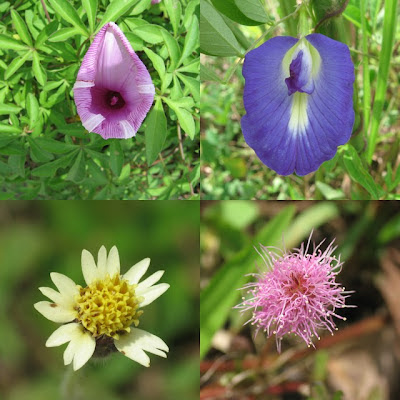 Some flowering plants common there. (Clockwise) A purple morning glory; their flowers open up during in the morning and curls during afternoon as seen in the picture. Clitoria sp flower. KS told me that this flower was rather uncommon now but it can be found everywhere! The roots of this flower has some medicinal properties but forgot lao...enlighten me again KS?
The 3rd flower, I'm not sure but knows that bees like to visit it. Fourth one is the mimosa, with their foldable leaflets sensitive to touch. 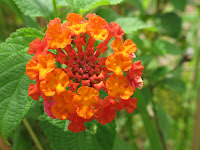 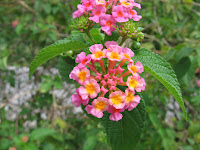 Multicolored Lantana sp. flowers. Although pretty, they are highly toxic! 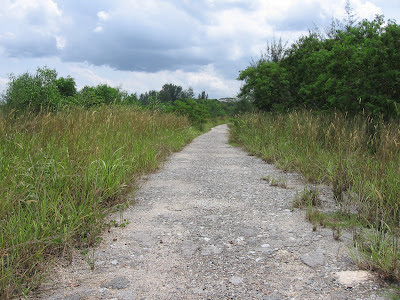 Lucky there was a pathway going inside. This is what I call a red carpet welcome, with grasses growing as tall as me and swaying in the breeze. :) 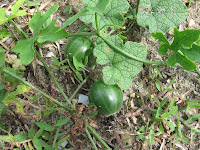 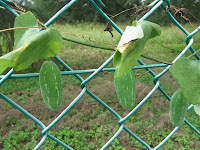 Some succulent fruits of creeping and climbing plants. Looks like miniature water melons and cucumbers to me. Wonder if they are edible. The ants seemed to like the former, all the orange ripen fruits were eaten, leaving only the skin. 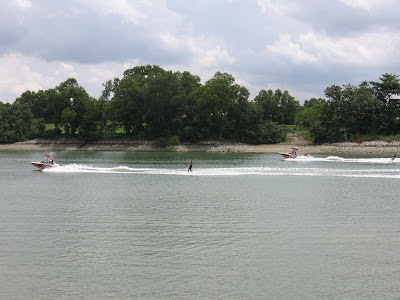 Sungei Punggol. Seems to be a site for water sports. Quite a few boats with angmohs water skiing. 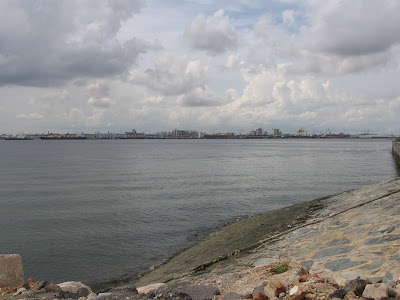 Pulau Serangoon aka Coney Island in the distance. Haiz...din expect it to be another Jurong Island. Read from NLB website that it was unhabitated and a location for migratory birds...Guess it have some updating to do.
Update>> I think I might have mistaken the distant land for Coney Island. That might be Johor instead. Will check it out the next time to confirm. 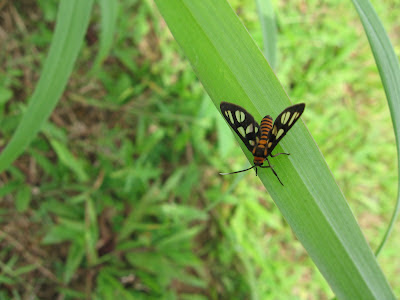 A moth, duno its ID. Remembered it was very common when I was still small but seem to hardly see it now. Update >> apparently is a day flying moth with a wasp mimic.

Lots of birds seen and heard today, but too bad my camera optical zoom is rather inferior and I forgot to bring my binoculars. Hopefully I can capture better pictures after I purchase my new camera, powershot A710 next week. Current camera officially down lao, and too expensive to repair. :( 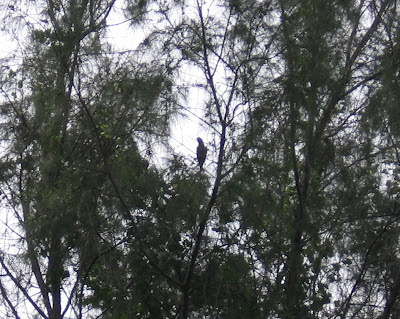 Some kind of parrot or cockatoo, judging by their noisy chatter. Theres alot of them around here! 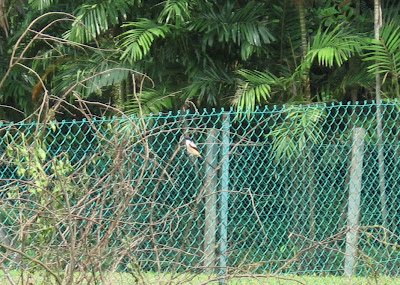 A stunningly beautiful bird, pity I cant get closer for a clearer picture. Anyone can ID? Else have to wait for a mth for Dingli to come back from Borneo... Update >> the bird is called long tailed shrike.
Yes, ultimately, walking aimlessly around without a decent map (only draw a rough one showing LRT lines...), I got lost... Spent the next hour dragging my body down the road before giving up and got on bus 82. 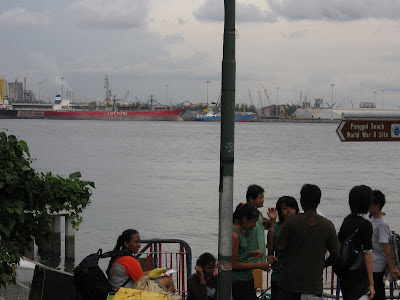 At the bus loop, it reached a small jetty where a few excited students await for the ferry to bring them to outward bound in ubin. So this is the place...srry I was too nerdy in the past to take part in all this activies ;p
Update >> This exact spot is also the National Heritage Site, aka Punggol Beach Massacre Site where about 400 Chinese civilians were killed by the Japanese in 1942 (WWII). This is part of a larger mass extermination of Chinese who oppose the Japanese (Sook Ching massacre) .
Nothing exciting or marvellous pictures to share in this entry but its cos I wasnt observant enough, not cos theres nothing much here. Will be back again wen I got a bike so can cover more ground :)
Anyway, my results turned out to be...superb!!! lolz... at least well above my expectations :D
Labels: Punggol

Congratulations on your results!

And thanks for sharing this wonderful wild part of Singapore.

Sigh. I'm sure missing out on the terrestrial stuff!

Didnt expect Coney Island to turn out this way.

Years ago when I kayaked there, it was wild! Inside the back-then foliage, there lies the foundation of once a huge mansion with a ballroom.

Will Ubin look like this soon? Shudders to think more.

Great trip... reminds me of my old trips to Marina East before the golf course took over

haha.. so in the end actually that is not coney island but johor :P

the moth is a day-flying moth (think Syntomis huebneri), and the bird on the fence is a long-tailed shrike!

Hey! I didn't know Punggol was so full of life. And by the way, you mentioned yourself going to Pulau Serangoon (Coney Island). How did you get there? As far as I know, the government hasn't buiilt a bridge linking the mainland to the island.

Hello, nope I meant reaching just in view of the island at Punggol, not stepping onto it.

Yea, the link to it have not been built yet.

Today,we are proud to announce the launch of the new wedding support service sell ffxi gil,packed with features sure to sell ffxi gils delight adventurers across Vana'diel looking to exchange eternal vows with their beloved!Responding to player demands for greater customization,the new service will grant brides and grooms freedom in choosing location,timing,dialogue,and sell Final Fantasy XI Gil more for their ceremony,allowing them to create a truly memorable event all their own.Information on all the features,including in-game sell ffxi gil item vendors and wedding certificates,can be found on the new wedding support site,so head on over sell ffxi gils and get started planning the wedding of your dreams sell Final Fantasy XIGil!

hi just to let you know, the island that you took pictures at is already coney island (pulau serangoon), not the island in the distance. :)

Yea, I know, this post was written 5 years ago if you noticed. ^^

Searching for the Best Dating Site? Create an account to find your perfect match.