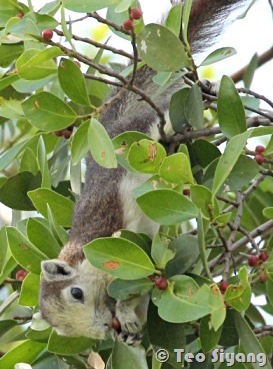 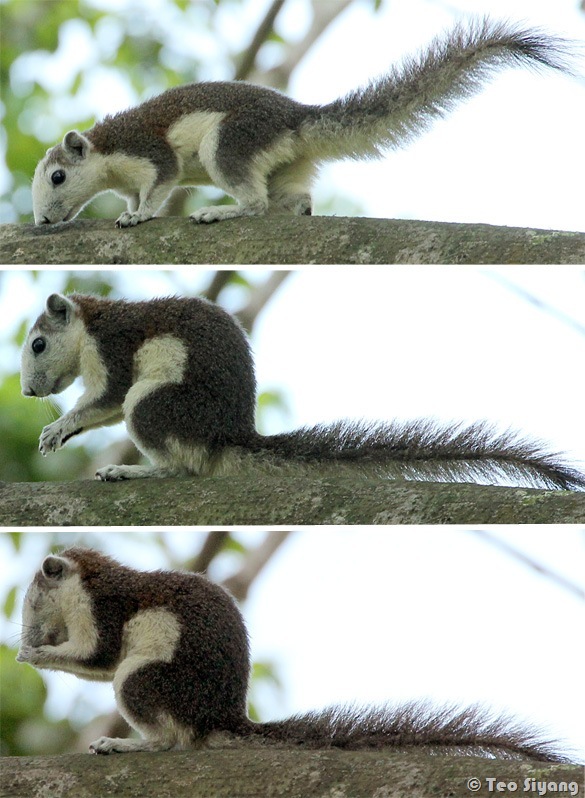 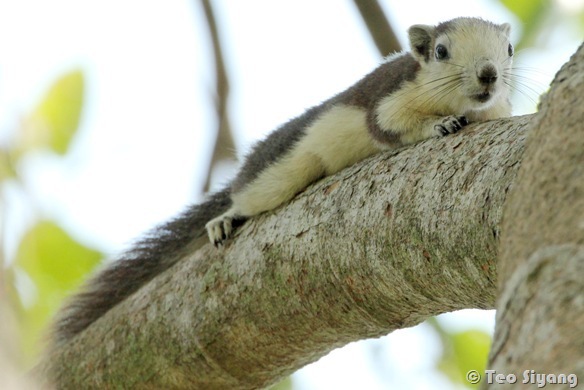 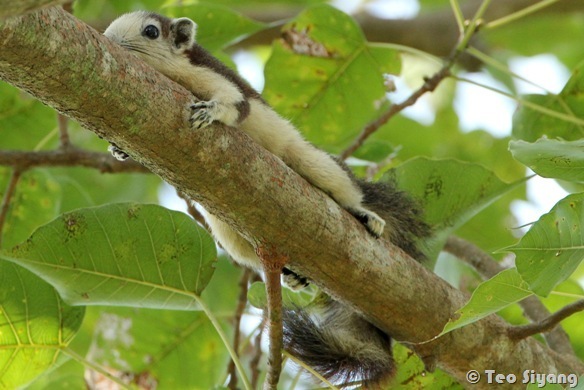 I am pleasantly surprised that after reporting to Google Maps about the erroneous labelling of the Central Catchment Nature Reserve as Bukit Timah Nature Reserve (see my previous post), they have acted fast and verify and correct the label slightly after one week! 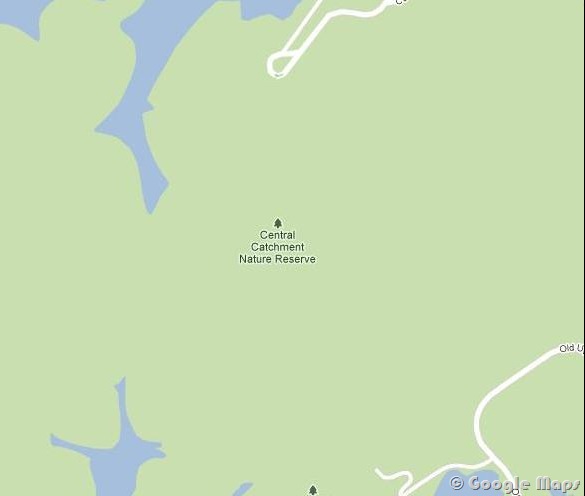 It is comforting to know that we have a responsive team in Google Maps that value our feedback seriously. Looking forward to more things to come from this great company!

It is tough being a baby swallow. One have to share the tiny space that is seemingly half the size of a typical nest since it was pasted to a wall. It must suck to be born as a claustrophobic swallow. 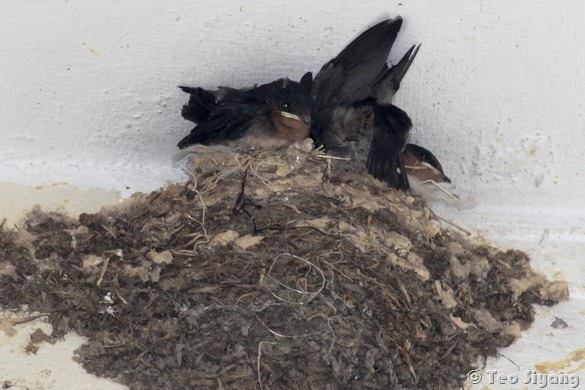 Even emptying the bowels is a tricky affair. I saw the middle baby shown above pushing its siblings gently so that it can turn around and drop the poop down to the ground. It then squeezed to make room so that it can turned itself around again. 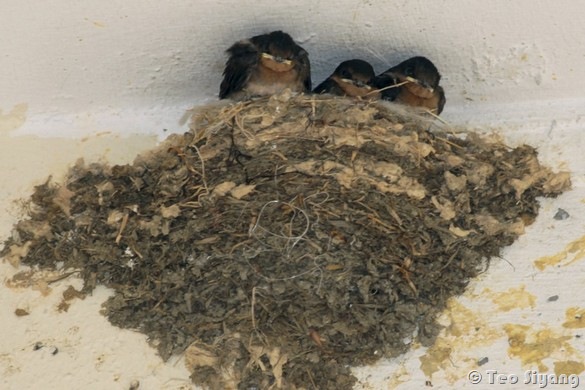 I have been observing this nest in the National University of Singapore since 2007 in my previous blog post. Every year I will see little chicks sitting here till now. I wonder if they do nest maintenance once in a while?

How to report a Google Map error?

From my previous blog entry, I indicated that Google Maps gave an inaccurate description of our Central Catchment Nature Reserve. What exactly is it?

If you see the embedded map below, the Central Catchment Nature Reserve is labelled as the Bukit Timah Nature Reserve. An outright blatant error. 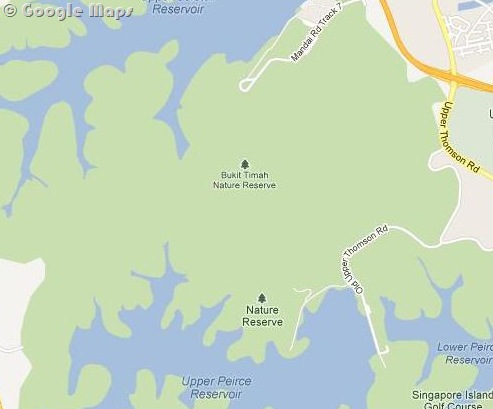 I decided to report this error. This can be done through the following: 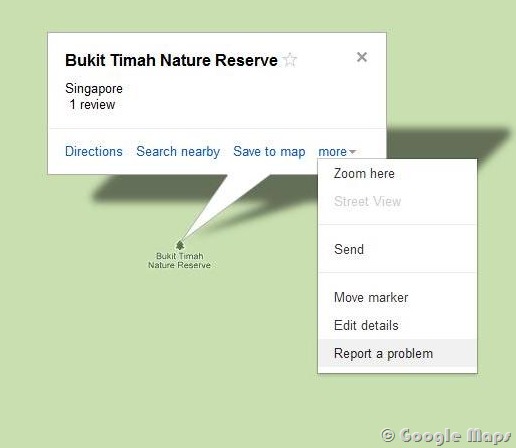 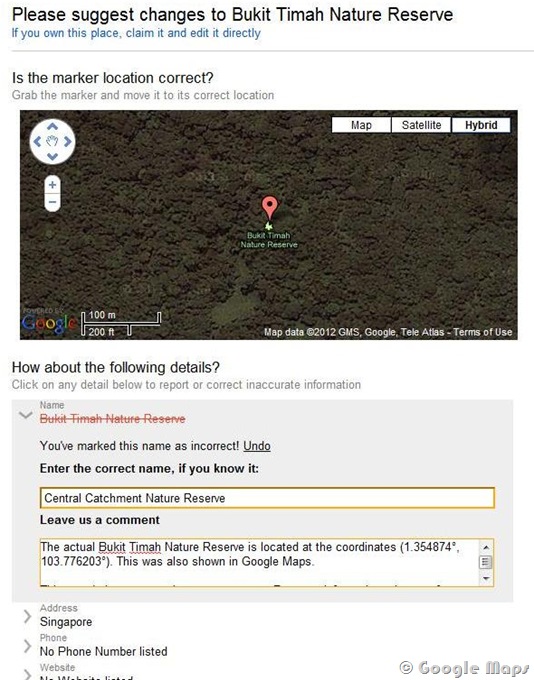 Then, you will be led to this page, whereby more details about the problem can be elaborated before submitting the report to Google.

You may sign in Google at this stage (so that they have your email) and check the box to request them to update you when the fix is done. For now, lets see how fast they will take to verify and correct the error.

Google have since fixed the issue after slightly more than a week. See my latest post.

Back to the blue at Changi Beach

After close to 2 years, I am finally back to the intertidal zone!

The purpose for returning back to the blue was to continue with the sea cucumber research which I set aside 2 years ago. This project was highlighted during the recent Festival of Biodiversity organised by the National Parks Board.

The first stop was at Changi Beach Park, which has always been my favourite Singapore’s mainland intertidal spot because of the diversity of faunal life. I was with Ron and two of my colleagues. 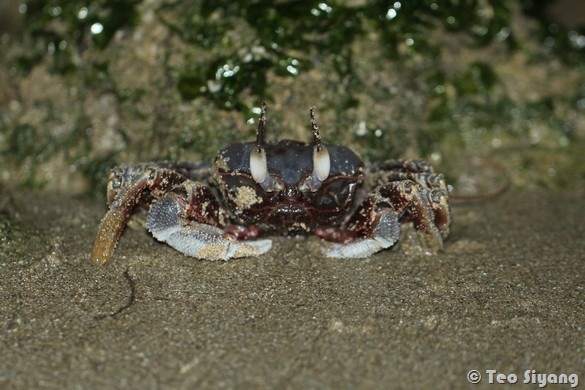 The first creature we saw was the horned-eye ghost crab, Ocypode ceratophthalmus. This is a scavenger which is also known to be able to run very fast! 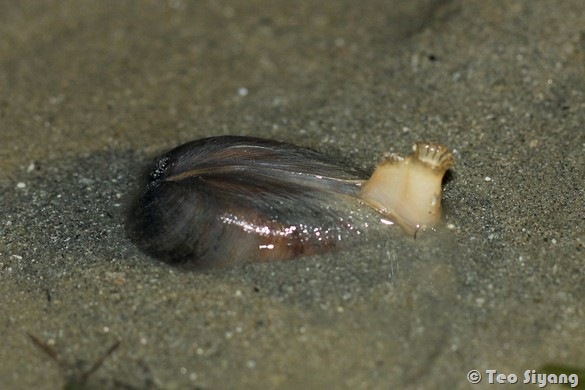 A live bivalve was attempting to burrow itself in the sane with much effort. It is interesting to observe its siphon which allows water to enter and exit its body for breathing and filter-feeding. 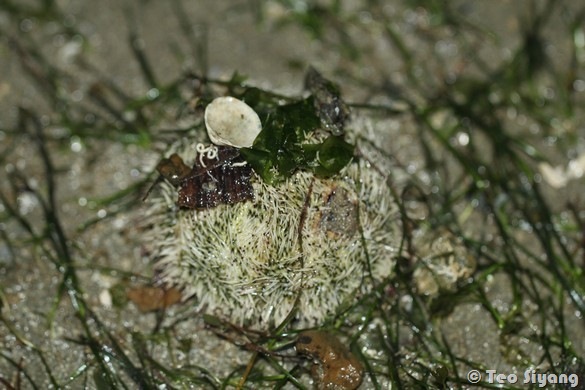 There were a lot prickly white sea urchin, Salmacis sp, scattered all over the beach. They camouflaged themselves by trapping pieces of shells, algae, and sea grasses cover their top. 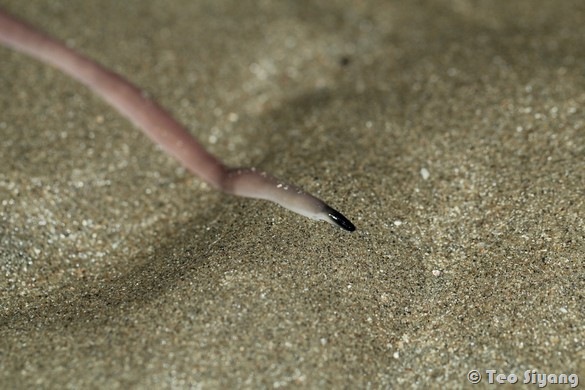 This ribbon worm was extremely long, being close more a metre! It seems as that this relatively common worm still do not have a scientific name yet. Hopefully the Mega Marine Survey will eventually help to solve this mystery. 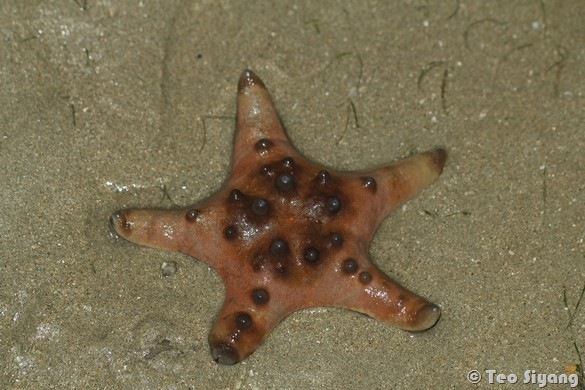 A nice find was this knobbly sea star, Protoreaster nodosus. This is still a little juvenile, and can grow up to more than twice its size eventually. 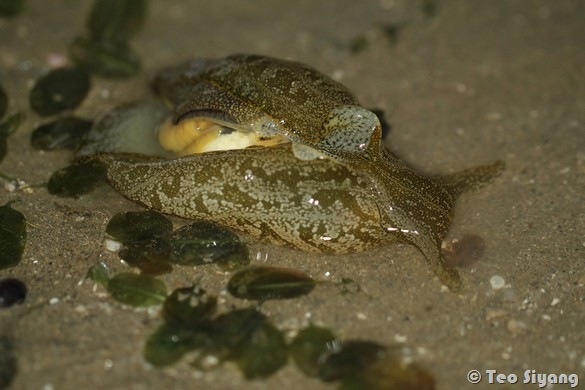 There were quite a number of these sea slugs, or more specifically, the geographic sea hare, Syphonota geographica. They are thought to grazed on sea weeds. 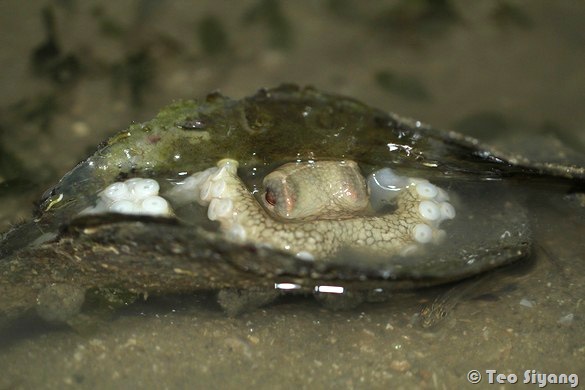 I also found two octopi, one hiding in the a dead fan shell and another in a huge bailer snail shell. 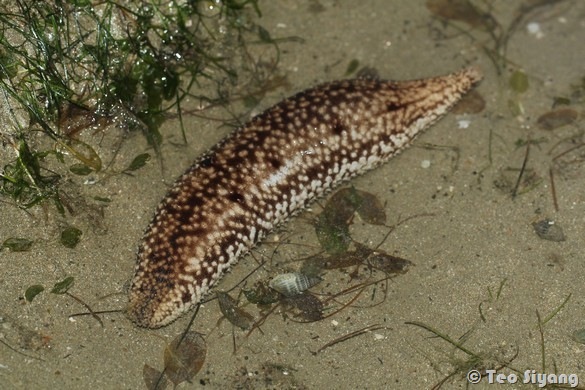 Moving on to the sea cucumbers, I was quite surprised to find so many Holothuria notabilis. They lie buried horizontally just beneath the sandy surface with their butt sticking out for breathing. Yes, they breathe through their butt! 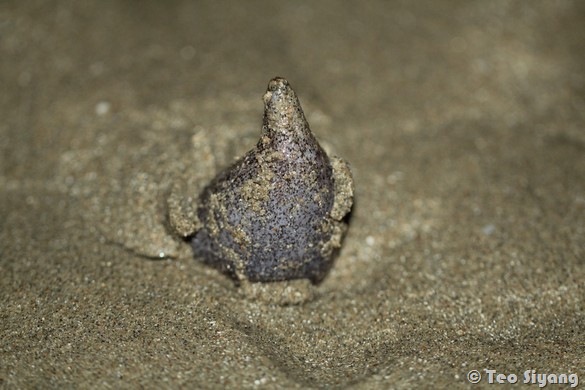 Another burrowing sea cucumber is this. In her comprehensive marine wild fact sheets, Ria named it as the smooth sea cucumber. Based on some of its external characters, including their simple stubby tentacles, they can be safely placed in the genus of Paracaudina sp. Microscopic examination will be needed to further zoom in on its identity. 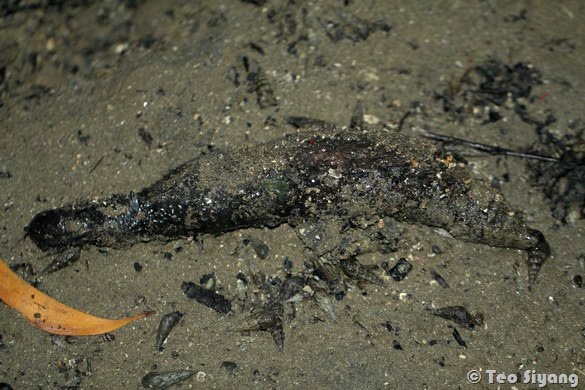 Another which deserves some study is this purplish sea cucumber which is frequently found under the rocks. I was unable to tell what it was at first glance; hopefully it will not elude me for long.

Meanwhile, at the other end of Changi Beach, Ria has found another fascinating sea cucumber which she highlighted in her blog. This is really interesting because it is very likely to be from a new family of cucumbers that is never recorded in Singapore!

Where is the Central Catchment Nature Reserve?

All of us know where the Central Catchment Nature Reserve (CCNR) is. Or do we?

I was unable to find an accurate map showing the boundaries of the CCNR from the National Parks Board (link), Singapore Land Authority (Onemap.sg), and even Google Maps.

In the end, after some research, the Urban Redevelopment Authority of Singapore (Master Plan 2008) and the Ministry of Defence (Singapore Topographic Map) seem to be the only two which got it right. Not surprising, considering the need for accuracy for land-use planning and navigation for the military respectively.
Download the map of Central Catchment Nature Reserve
Unable to obtain a decent map, I decided to created one on my own. You may download the high-resolution map free at my Download page. Please email me if you find any discrepancies. I will be more than happy to correct it! 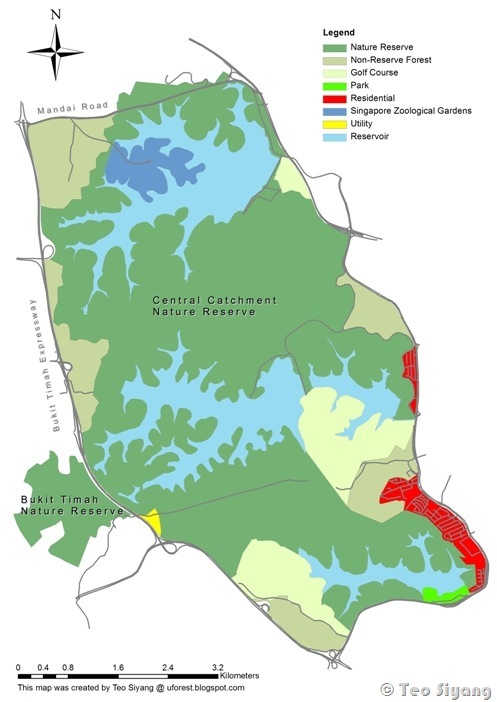 Some explanations of the legend are described below.

Having consistent and accurate information is important, especially when it involves the conservation of our fragile biodiversity. Already, the CCNR is already threatened by many developments and structures within and surrounding it; and it will continue to be faced with them in the future.

But, that will be a separate post for another day. Stay tuned!
The map was created using ArcGIS with the following resources:
1 comments Labels: Central Catchment, Publications