Some of the Semakau guides stayed overnight at St John's island the last weekend to try out some of their facilities for future events. December was the monsoon period and it rained heavily during the afternoon. Luckily it stopped just on time for us to visit a small patch of mangroves where the locally rare Avicennia marina was found (unfortunately my picture was too blurred). 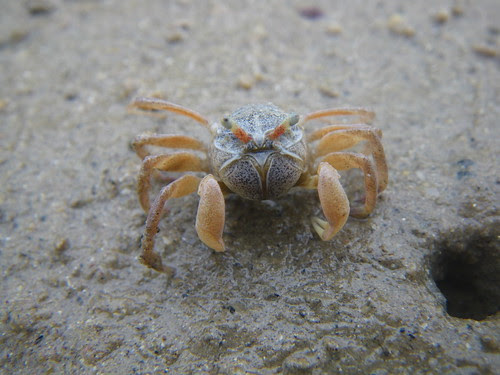 After that, we walked along the intertidals to reach the rocky shores. Along the way, we sawan army of crabs scurrying along the mud. This is the first time I saw the soldier crabs, Dotilla myctiroides moving in such masses, as beach development had decline this crab's numbers that they are listed as vulnerable in our red data book.

There were lots of onch slugs on a pipe leading out to the sea.


The rocky shore is practically covered with sargassum and bryosis seaweeds. However, life can still be found here. Above is a video of a spider conch flipping itself over using its unique sickle-shaped operculum.

There were also lots of blue coral (Heliopora sp.) near the reef edge 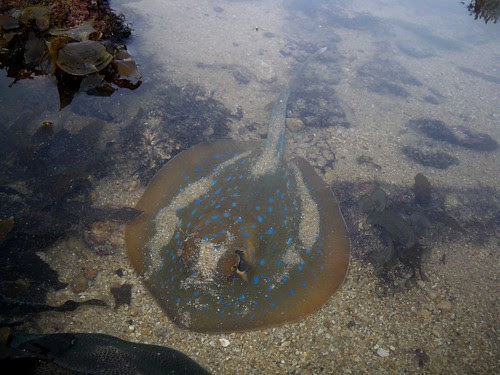 Two brain corals which often confused me. Lobophyllia sp. with its deep gorges between the ridges; 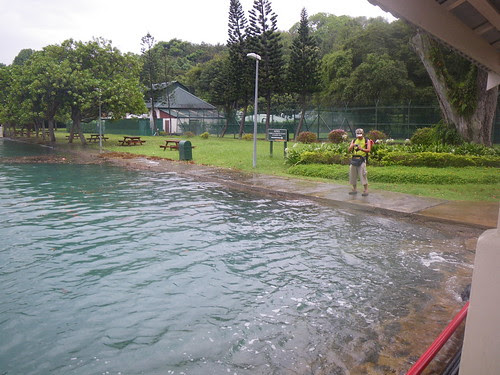 The next morning when we were at the jetty ready to depart the island, we saw that the high spring tide had raise so high that it was overflowing the concrete banks.

Quantula striata is a very common land snail found in gardens and forest habitats. It grows up to 5 to 6cm and carrys a somewhat flatten shell horizontally.

However, as SK shared with me, what is remarkable about this snail is that it is the only known land snail that have the ability to bioluminescent. This is emitted by a photo-organ at its mouth. However, it is more common in the juvenile snails and its eggs while most adults lost this ability. It was hypothesised that the light was used to "facilitate the aggregation of other snails to quickly perishable food" but tests proved it to be false. Seems like so far noone else was able to get a reason for its use.

SK said that the flashing is very faded. I tried taking a small one (the one above on a rubber tree fruit is about 1 cm) in a dark room. Unfortunately, no flashing was seen. Nevertheless, it was still an interesting knowledge gained!

Today, RY brought a bunch of us to Pulau Ubin to help us familise with the variety of local mangrove species that we have. 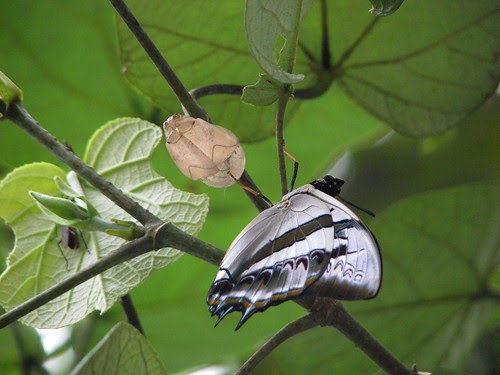 Near the jetty, I spotted this pretty Blue Nawab butterfly, Polyura schreiber tisamenus. which had just emerged from its chrysalis. A mangrove butterfly, its caterpillar is known to feed on Bruguiera spp. and Rhizophora spp., but apparently it feeds on the sea hibiscus too. 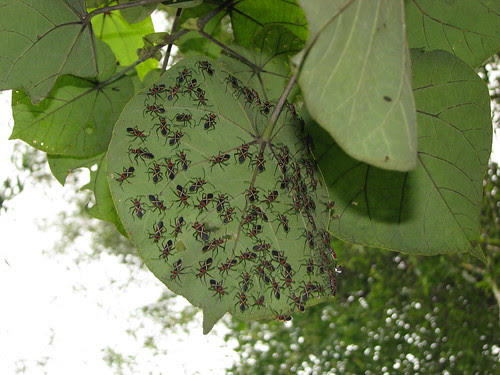 Today was also a good day for seeing the cotton stainer bugs, Dysdercus decussatus which hides in swarms under leaves. They feed on the seeds of the sea hibiscus, Hibiscus tiliaceus. 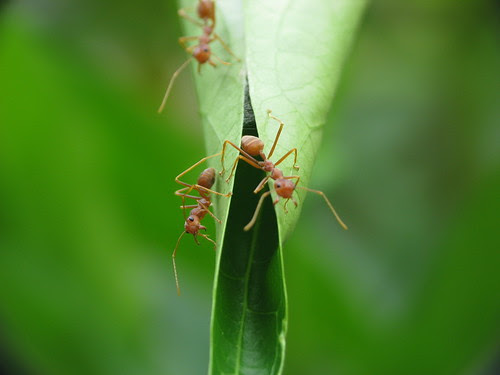 Weaver ants, Oecophylla smaragdina, are also a common insect in the mangroves, especially on the Noni plant, Morinda citrifolia. They are notorious for their painful bite with an injection of acid to the wound. 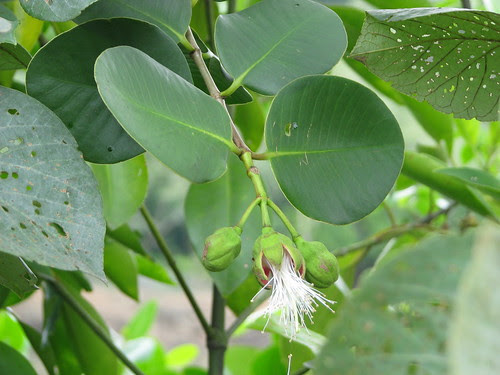 An uncommon local species, Sonneratia ovata, it can be differentiate from S. alba (below) from its more circular leaves and distinct veins. 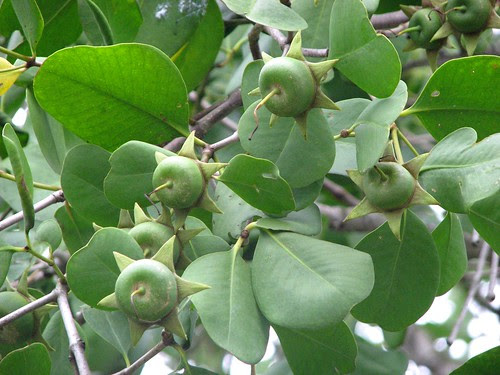 Theres are the the fruits of Sonnertia alba, very rounded and wrapped by a calyx with lobes that bend backwards. 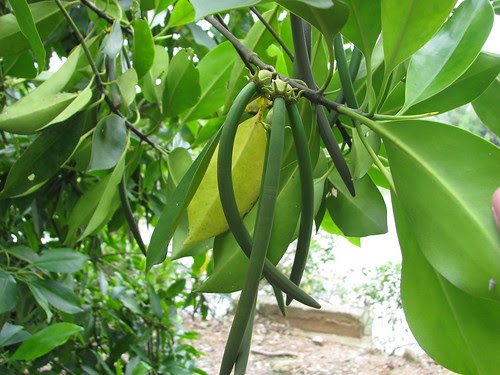 The propagules of Bruguiera cylindrica, like S. alba, has calyx lobes that are bend slightly backwards. 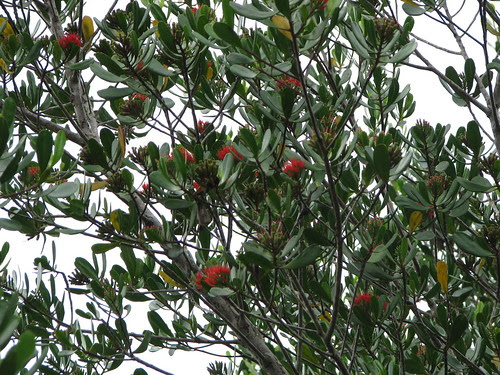 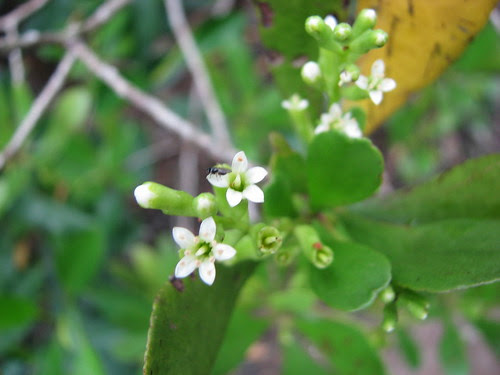 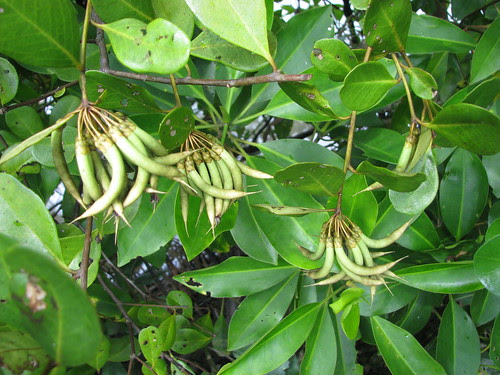 Kacang Kacang, Aegiceras corniculatum means beans in Malay due to its bean like fruits.

A stick insect, but where are its six legs as all insects should have? The front and back pairs of legs are actually extended forward and backwards, possibly to make it resemble more like a branch. 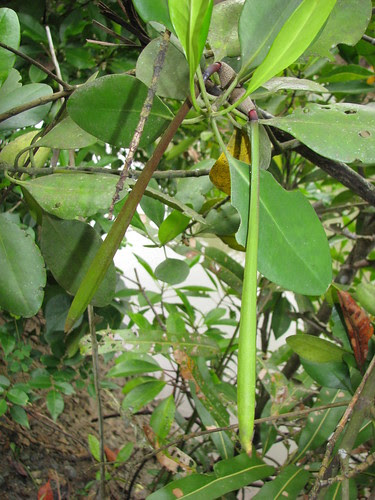 This is Ceriops zippeliana, identifiable from the propagules which have a red collar and patterned calyx. 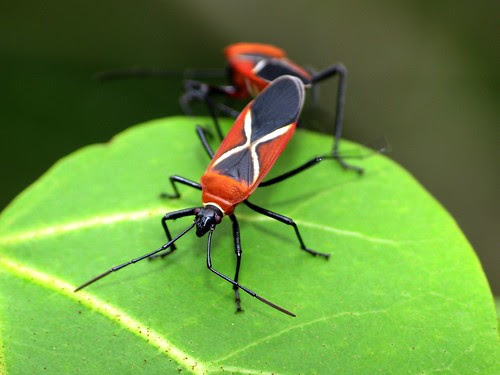 One of the two highlights of the day. This is not the typical cotton stainer bug, but Dysdercus simon which have a black head instead, feeds on the seeds of the Portia tree, Thespesia populnea. In the Singapore Red Data book, it is classified as endangered and known only one locality between Kranji and Sungei Buloh. This is something worthy to celebrate about seeing it in Pulau Ubin too!

Walking almost the entire day lost, we were finally rewarded with this Bruguiera hainesii spotted by RY! The malay name, Berus Mata Buaya, meaning crocodile eyes, refer to the large lenticels on the bark, which I unfortunately do not have a picture of.

A tiring but great day spent at Ubin. Thanks RY :)