Finally was back in Pulau Semakau after several months. Today I guided together with Iris, students from Nan Hua High School. 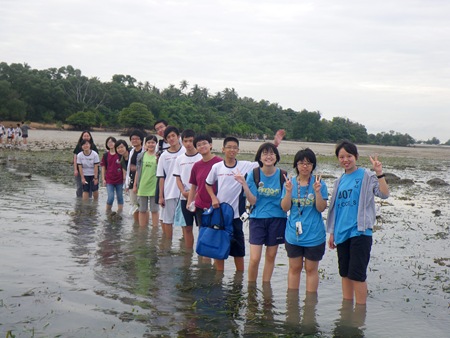 Here is my group, the seagrassers, with Iris at the back crossing the seagrass lagoon. They were unprepared in getting their feet wet but luckily, all were sporting enough to carry on to carry on with the intertidal walk. 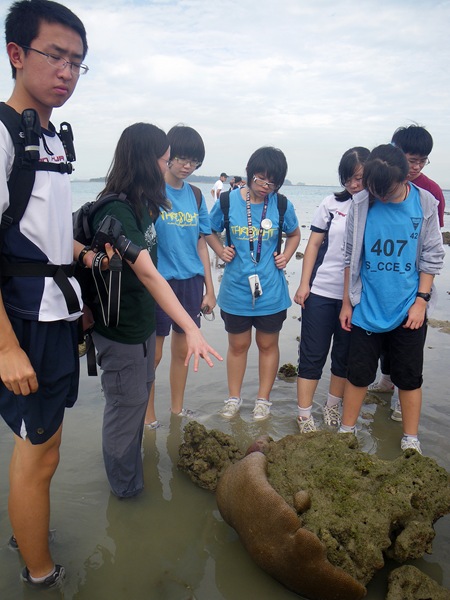 And here we have Iris telling them more about hard corals. We saw many other animals like the giant clam, sea urchin, sea cucumbers, sea stars and a giant nudibranch more than a palm wide (Dendrodoris tuberculosa). 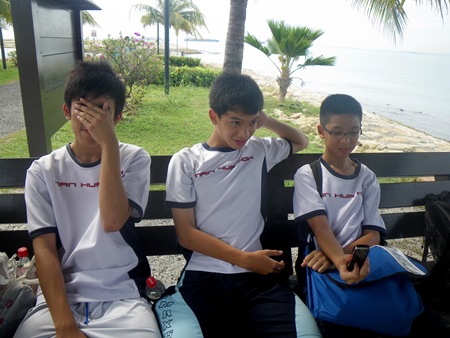 And at the southern most tip of Semakau, the three guys reluctantly posed for me. lol~ 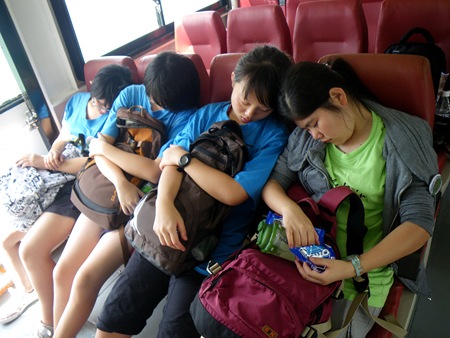 After a long day out from 4am from their school till noon, some just slept the entire way back to the mainland.

The ‘purple-under-a-stone’ sea cucumber as named in Ria’s wildfact sheets is identified as Afrocucumis africana! This was reported in a short note in Nature in Singapore which me, Lionel and some other friends from plant systematics lab did. You may click on the picture to download the free article. 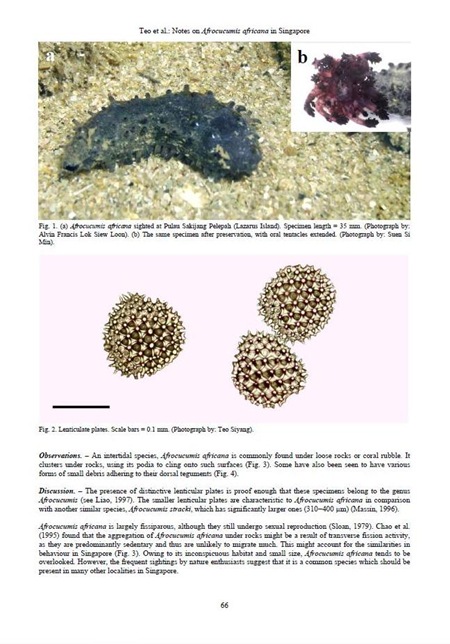 We have another sea cucumber article in review (which was actually submitted before this paper, but for some reason delayed). Watch out for it!

Just after finishing my earlier post, I suddenly realised that M had told me about this rooftop garden beside my house and that it is only opened on Sunday mornings which is when the residents came to take care of the plants. I immediately grabbed my camera and headed down to the multi-storey carpark where it was located. 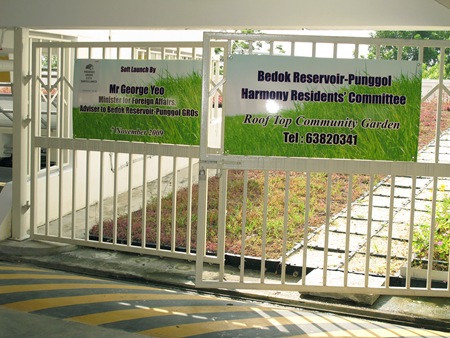 I guessed this garden was not publicised at all from the word “soft launch” in the picture. But they have their reasons why, I think, of which I will explain later. 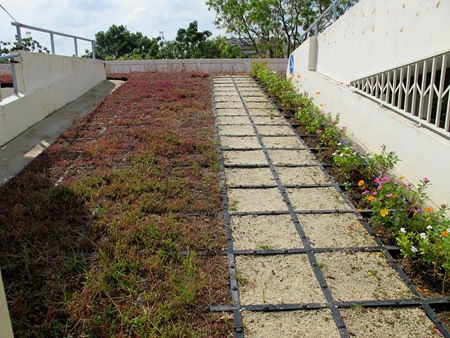 From the slope up to the final storey, the garden started, with grasses and periwinkles linking all the way up. 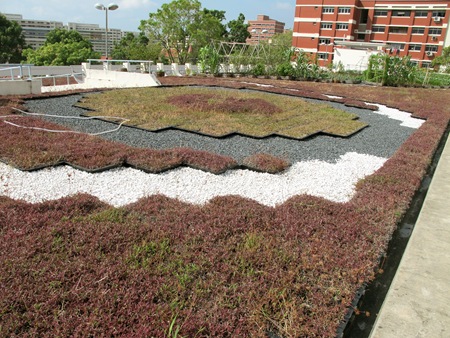 All the grasses were packed in black plastic containers that covered the entire level. 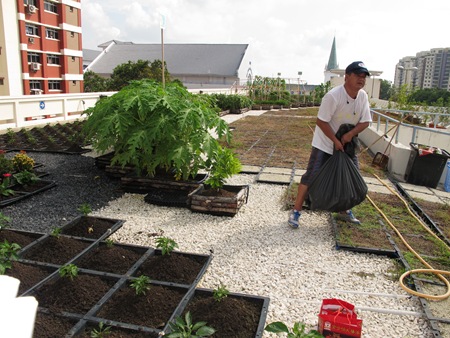 I saw M talking to the residents managing this garden. Unfortunately, they were already packing up to leave so I can’t go around taking pictures and learning about the plants they grow there. They harvested some vegetables and donated them to the Church of the Nativity and Blessed Virgin Mary (in the background).

This garden is out of bounds and kept locked and monitored by CCTVs to prevent people from coming in to steal the vegetables which are meant to be grown for the needy. Good way to make use of this place since it is unlikely that anyone will park the car on this extremely hot place.

It seems like the longest time since I last guided (about three to four months), and I have to do some last minute ploughing through the notes prepared by Jun. Luckily my participants were an enthusiast bunch of students from Queensway Secondary School, and I have to spend most of my time answering their questions instead of me initiating them.

Unfortunately, I did not take much photographs for the trip as I did not want to dirty my reasonably new camera. Here are some snapshots of the participants: 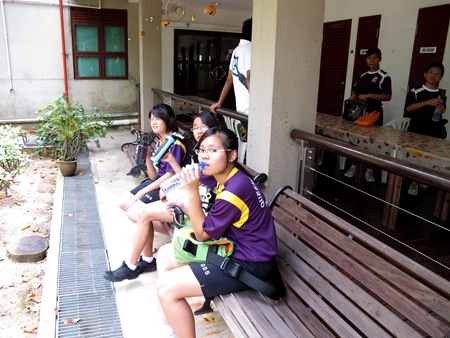 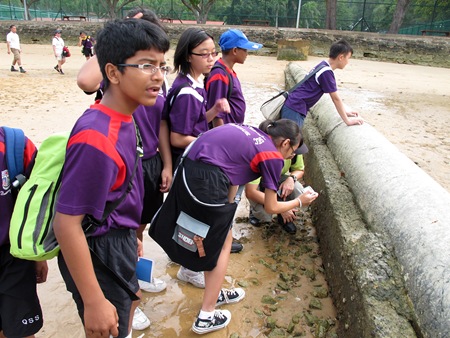 My group peeping at the Onch Slugs at the pipeline. 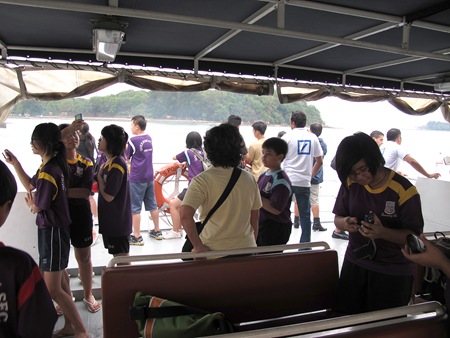 All of them were jubilant taking the big Singapore Island Cruise boat back mainland rather than the noisy, rocky orange boat which we took when going to the island.

Thanks to A for organising this trip to the Central Catchment Nature Reserve, together with KY, CK and L. Nice to have a bunch of plant experts around in a forest at this timing where there were hardly any animals so that it is not boring and also a great way to learn about more forest plants. 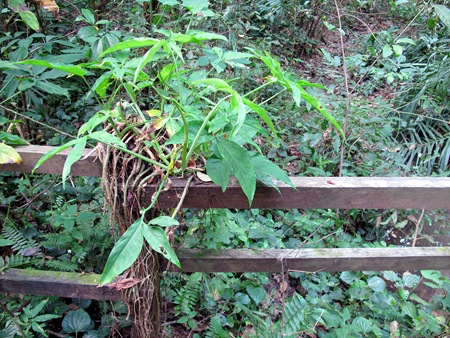 This is Syngonium podophyllum, an exotic climber that has established in Singapore from horticultural trade. KY has written an NIS article on it recently. 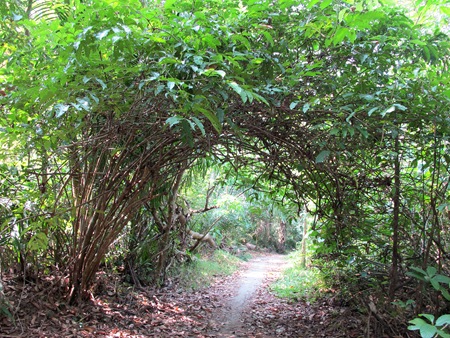 This looks more like a landscaped garden than a nature reserve, with overhanging arches of Leea indica, 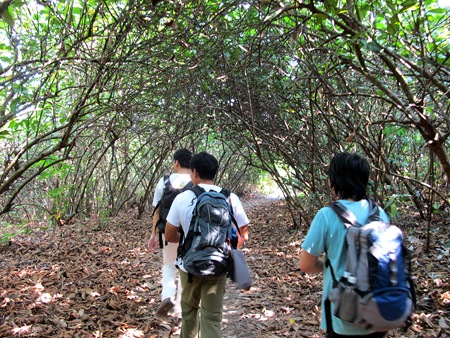 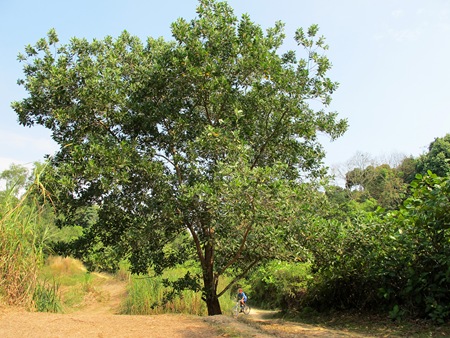 I learnt another exotic acacia today, Acacia mangium, which has wider phyllodes wider than the more common Acacia auriculiformis. 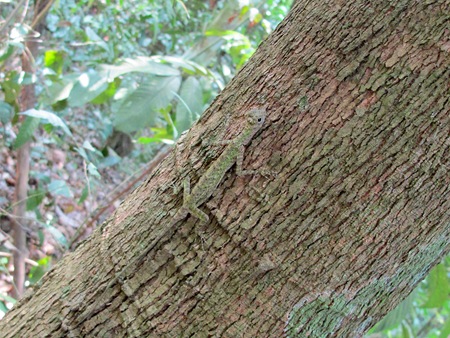 One of the more interesting animals we saw is this well camouflaged flying dragon (a lizard), Draco sp. It has a flap of skin between their limbs that can spread out like wings to glide from tree to tree. 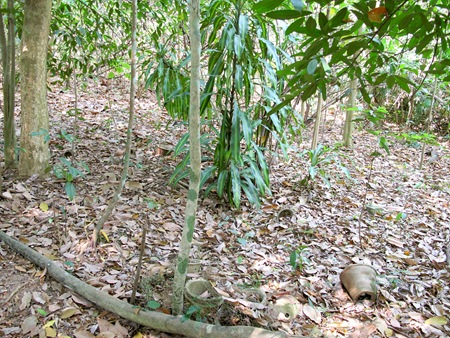 We passed by what seems to be a nursery of some sort, with lots of horticultural exotic plants and abandoned pots around the area. The plant in the background is Dracaena fragrans. 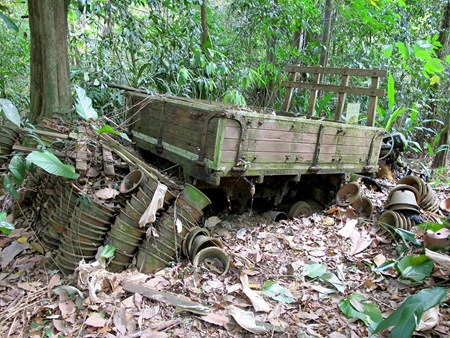 There was also this lorry that had disintegrated to this state. 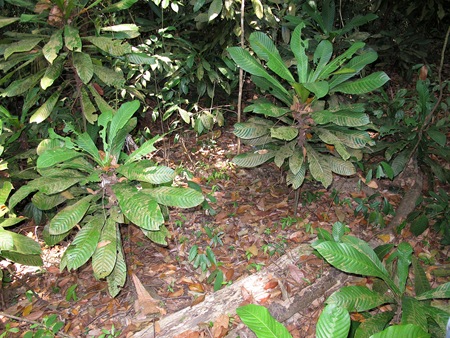 These leaf litter plants indicate that we have entered a primary rainforest. 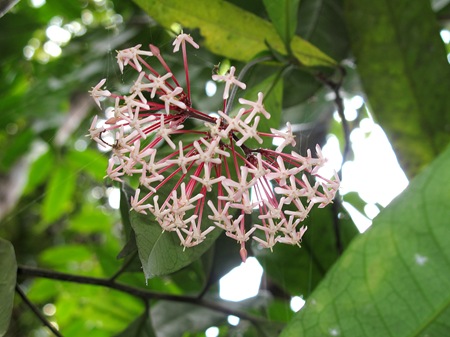 There were several Ixora species which we saw in the forest and this, Ixora pendula had the prettiest flower of all. 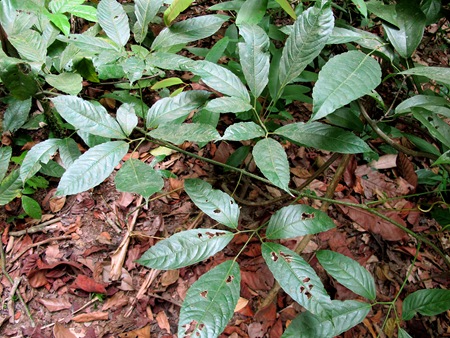 KY pointed out to this liana or woody liana, Tetrastigma sp. In Borneo, the largest single flower in the world, Rafflesia sp., parasitised on another species of Tetrastigma. 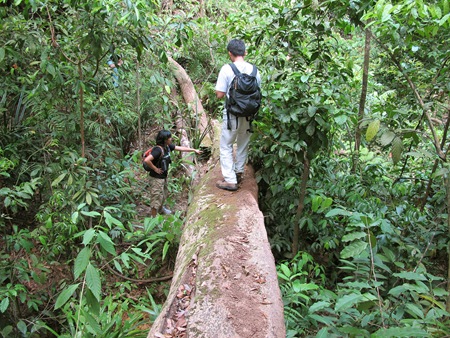 There was a huge tree fall that provided a convenient bridge across a swampy area. 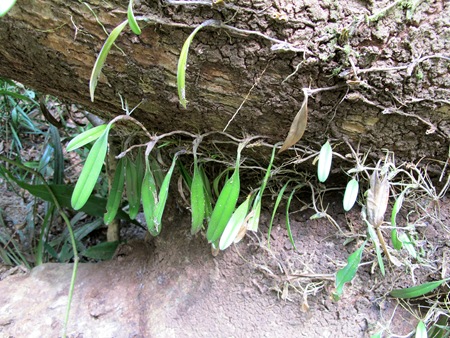 And at the end of the bridge, some wild orchids, Bulbophyllum sp. growing on the dead tree. 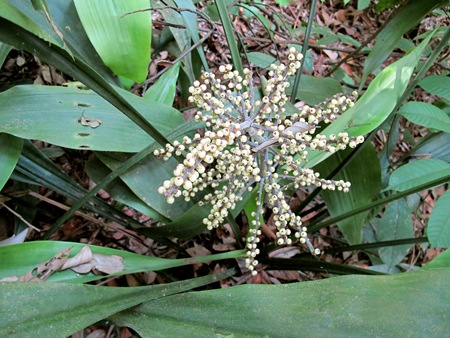 This is probably my second time seeing this herb, Hanguana malayana. It is so abundant along the place we tracked and a lot of them were fruiting. 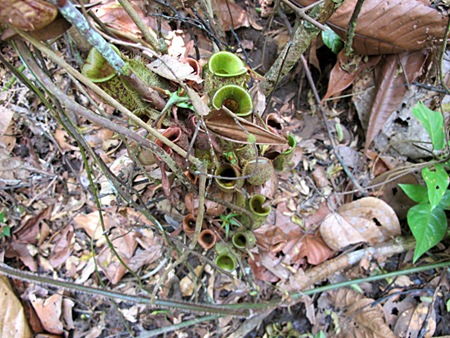 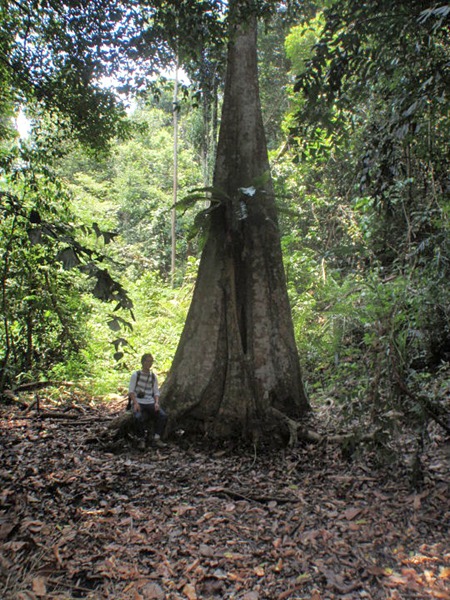 There is also this gigantic tree at one of the tributaries leading to Upper Peirce Reservoir which CK said was probably an Alstonia based on the leaf character. Update, this tree is Alstonia spatulata. Correction: Thanks to Tony, this tree is more likely to be Alstonia pneumatophora, which has a taller buttress. 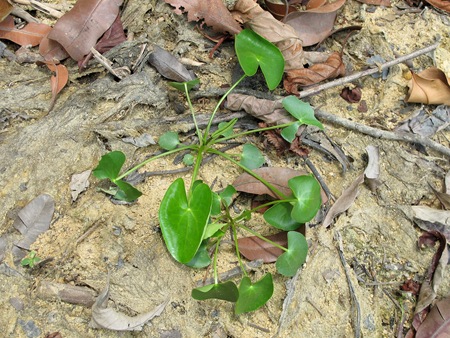 At the coast of the reservoir, we found this water snowflake, Nymphoides indica which was supposed to be an aquatic plant, but probably because of the month old drought and heat, the water level has reduced drastically, was now on dry land. 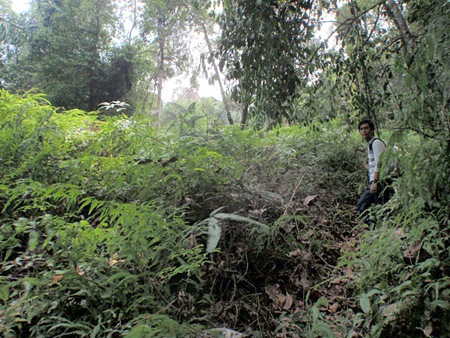 I did not take any pictures for the later half of the trip as I was already dead tired and dehydrated. At our final run, CK led us on a heroic bashing through a thick clutter of resam fern, Dicranopteris linearis up a hill labelled as Bukit Panjang in Google Earth, following which is an manicured trail to civilisation.

Definitely a memorable trip and learnt many new things! But must definitely bring more water than a 600 ml next time!

Thanks Louise for the 3rd last and last photos~