Jenal Jetty. My guess is that not many people has heard of this jetty, and I wondered if this is the name of just one of the many jetties there since the signage was only pasted on the entrance to one. 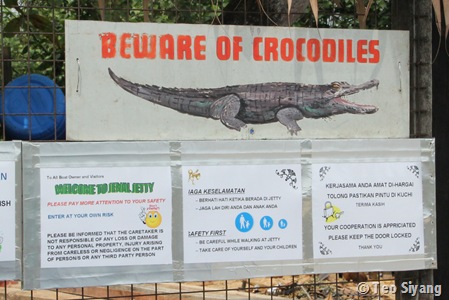 I got a preview of this place from a youtube clip. The entertaining host introduced this place as Seletar jetty in Chinese though.

It seemed like a pretty nice and small place for the weak and sickly (down with flu for a month) me to visit, so I decided to take a cab down there. 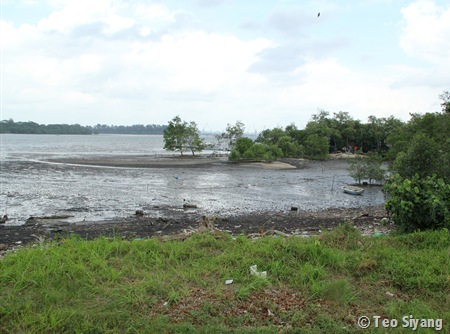 Here is the place at low tide. It wasn’t particularly fun to wade in this mangrove as the mud was very soft in most places. 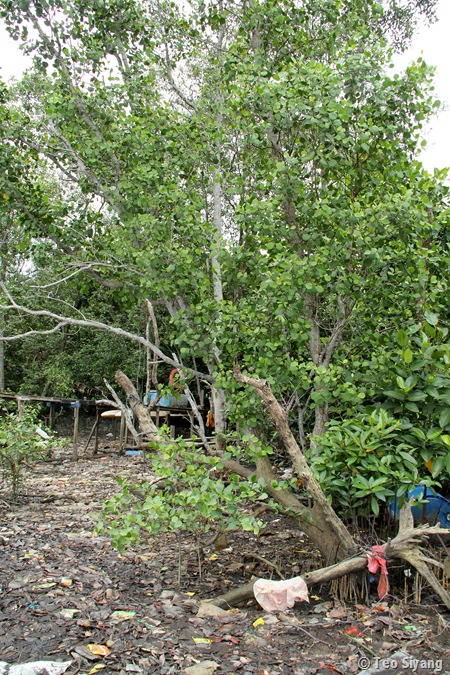 The mangrove trees are the usual common ones, with many Sonneratia alba at the outer fringe. 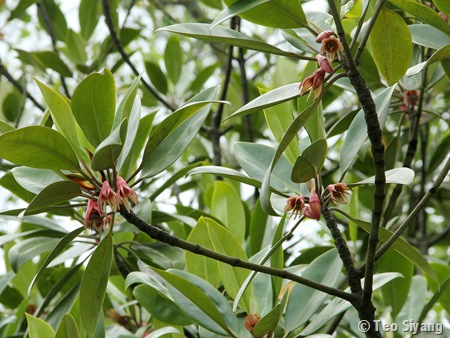 And others like Bruguiera gymnorrhiza (above), Bruguiera cylindrica, Avicennia alba, Avicennia officinalis, Avicennia rumphiana, Rhizophora apiculata, Xylocarpus granatum, can also be found etc. Nothing particularly special, but then again, I’m not that good in recognising some rare mangrove trees too. 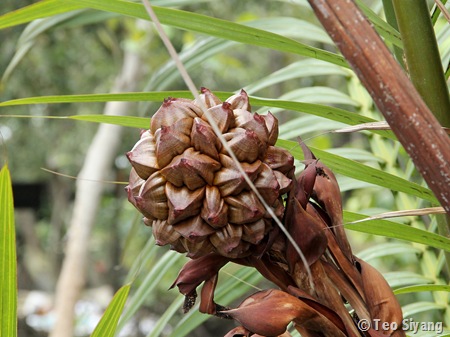 There were also some Nipah palm (Nypa fruticans) here. Shown are the fruits of the palm, and the soft insides are used to make attap chee. 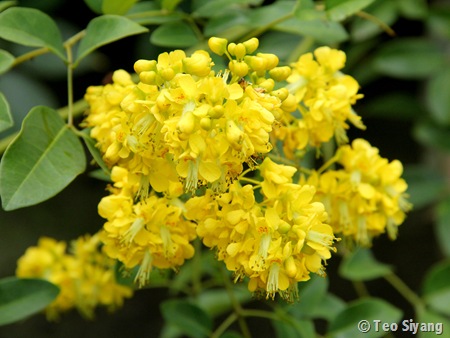 Probably the highlight will be the flowering of the nasty thorny climber, Caesalpinia crista. The mangrove trees cluttered with these climbers were flushed with yellow with its bright flowers. RY mentioned about this flowering phenomenon in his latest post. 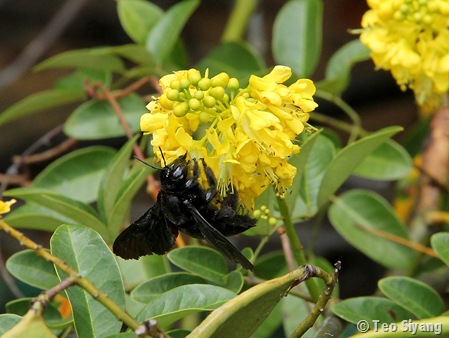 Here is one with a carpenter bee collecting nectar from it. 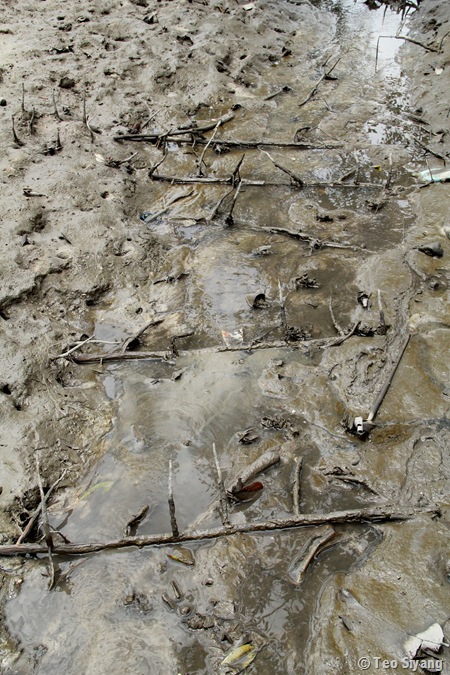 A tiny river flows out to the sea and exposes the point of attachment of the pencil roots of the Avicennia trees to its secondary roots. 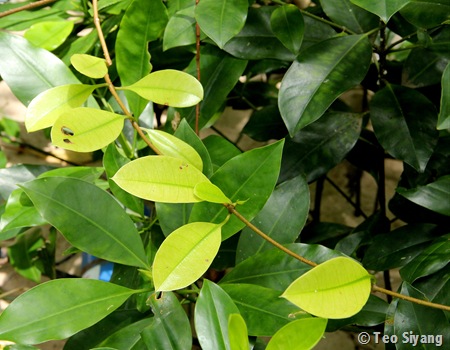 Finlaysonia obovata! A critically endangered climber, though it seemed to be quite in abundance in some mangroves. 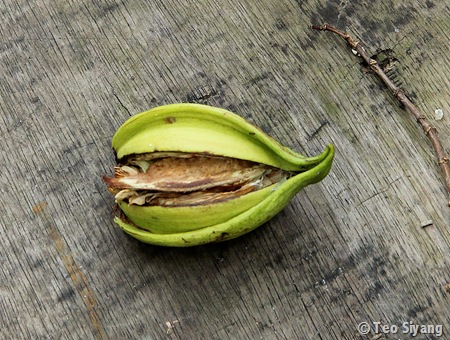 One of its fruit fell onto the boardwalk. 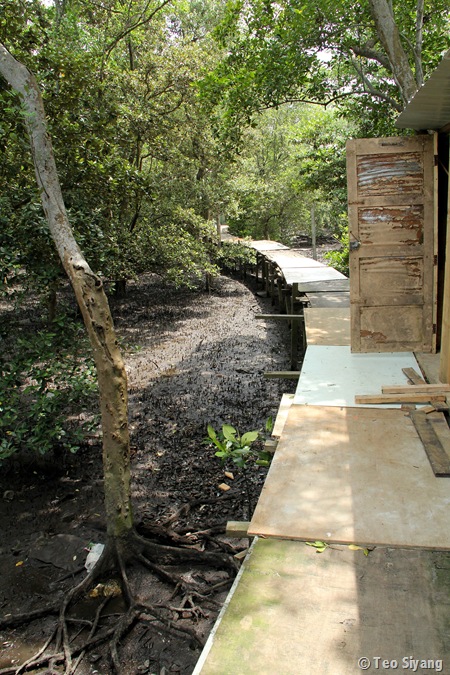 Did I say boardwalk? Yes, mangrove boardwalk! Pretty cool eh? They were several of these which led from the makeshift parking lot to the jetty. 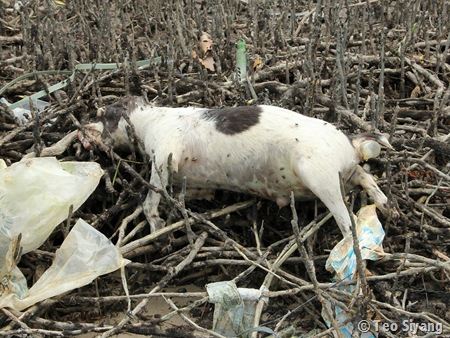 How come there is a dead dog here! O_o 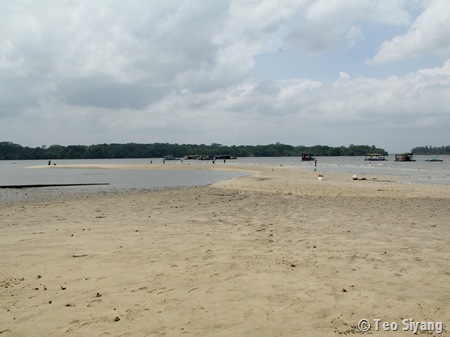 Towards the end, a sand bar extends out from the mainland and it served as a good spot several anglers to fish. Like the uncle below~ 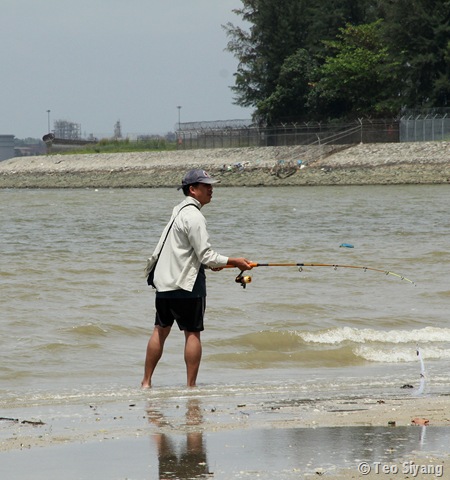 I was the odd guy there with my camera and new binoculars. Received a few stares but I still stayed there for awhile as the sea breeze was especially refreshing. 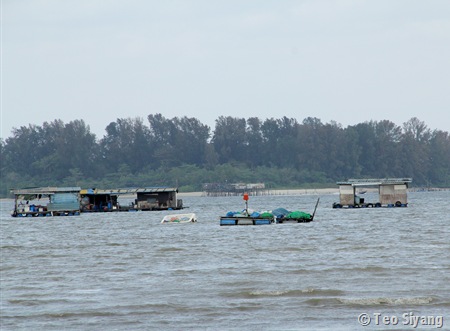 Straight ahead is Pulau Seletar. Through my binoculars, I could make out many outlines of Casuarinas, Coconut trees and Sea almonds. But I am sure that many undiscovered treasures lie beyond my sight. I’m referring to plants btw~ 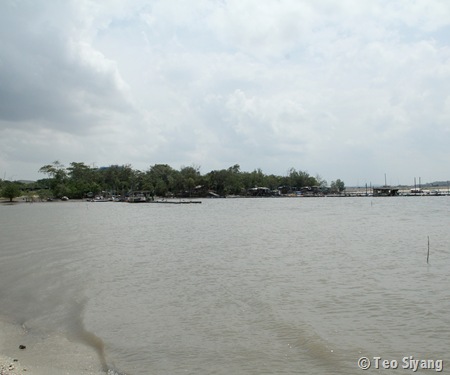 A look back at the mangrove, jetties and humans that I passed by today. Not the best picture I guess, but I tried to expand it oredi~ haha

Just realised that I was not the only at Punggol Beach yesterday, after seeing RY’s disturbing post about Caesalpinia bonduc demise here.

A waterfront is in the process being constructed along Punggol Beach, and much of the route has been constructed to quite a distance. Many fishermen, joggers and leisure seekers were already attracted to this place when I was there. 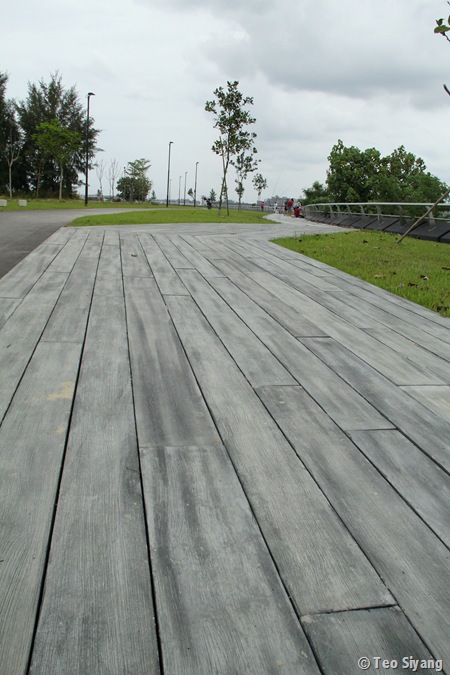 I spent quite a fair amount of time loitering about the eastern side of the waterfront, where Coney Island, or Pulau Serangoon is located. Around the far end of the island, near the mouth of Sungei Serangoon, I saw 2 sea otters at the bank of Coney Island. They quickly disappeared on seeing me but it left me deep in thought. This entire water body has already been blocked by the bridge linking to Coney Island and dammed from the island to Lorong Halus, and has been almost converted to freshwater, evident from the grasses and sedges growing partially submerged in the water on the island. Will this change affect the otters or its prey? Much of the entire reservoir banks have also been converted to stone walls and it does not appear to have much areas for the otters to venture about on land. 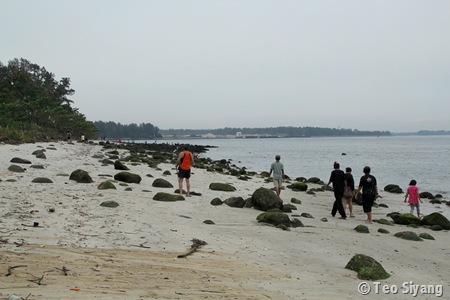 With so many people coming to know about this new leisure spot, it is no wonder that many curious beach combers also came along during the low tide. I saw a man who caught a seahorse and tried to forcefully pushed it through the tiny opening of a mineral bottle filled with sea water. In vain, he tried again but gave up and dropped it in a plastic bag instead. This was probably the pinnacle of cruelty that I have seen a person treat a marine creature… No living thing deserves to be handled this way, and it was very disturbing seeing a mature adult do this.

It is for certain that more and more people will visit this place when the waterfront is completed. Perhaps some signboards should be placed to discourage people from unnecessary collection of live animals?