Animals can also be environmentally friendly too! Now I know that some birds actually recycled their nests. Lets see some of them in NUS... 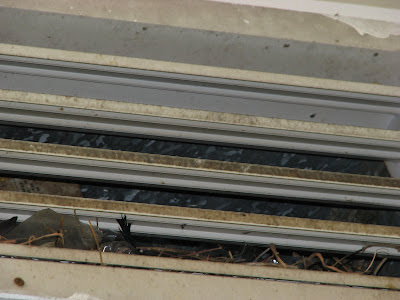 I had covered about this nesting last year but well, its gone when I accidentally deleted my blog last time. This belongs to a Javan Myna which build its nest in an air vent. Today when me, diana, lionel and wendy passed by it, we saw the Myna carrying some twigs on its beak and flew into the vent. Look all all the twigs in there! We clearly heard the chirping sounds of its chicks but they well hidden inside from view. 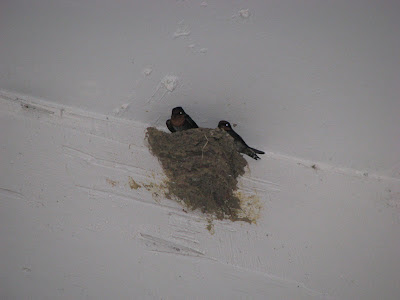 Remember the pacific swallow's nesting last time? The chicks were long grown up and off but yet, yesterday evening I spotted two birds inside it. This morning when I when to see it, they were gone but back again in the evening once more. Interestingly they are two seemingly adult pacific swallows. Perhaps there are eggs there? Or perhaps just a convienent roosting spot? Questions to be answered~ 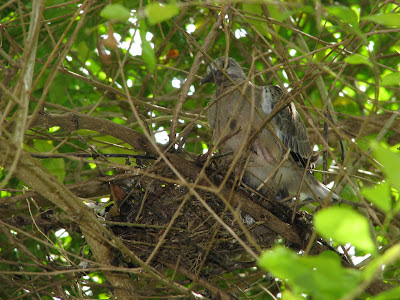 Updates on the dove fledgings. They are pretty grown up now and from the looks of it, the nest is getting too small for the both of them. Think can expect them to take off anytime soon. 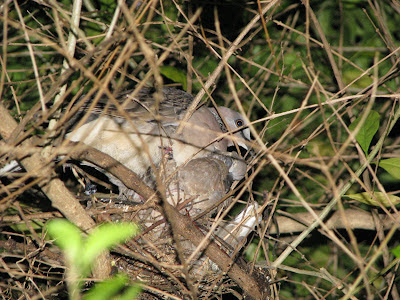 And their parent back later in the day.
0 comments Labels: NUS

Another bird nesting in NUS! Got the news from Shun de who coincidentally saw it when he heard a sunbird calling. He looked up and saw the nest. The next day, me, daniel, dingli, kaiqin and kok sheng went to search for it. Not knowingly the exact position of the nest, we peeped through srubs and bushes and trees. And we found 2 other nests lol, but apparently looked like they are abandoned and uninhabited Here was the nest on the left arrow. At first I thought it belonged to the olive-back sunbird that was chirping frantically nearby on the right arrow but dingli pointed that the nest is not a typical sunbird nest. True, but why was the sunbird refusing to go off and sounding so alarmed? Dingli suggested that a changable lizard that was lurking near the nest and the sunbird was helping whichever bird that built the nest to "jaga" the nest. haha... well who knows, theres lesbian hornbills, anything is possible. ;p 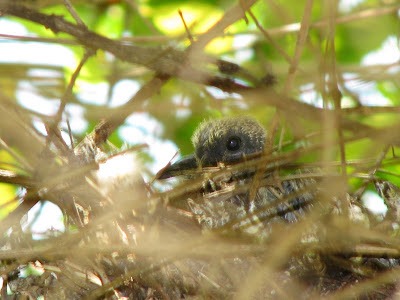 The next day, after my lecture, I went immediately to the same place with my camera. Just as I was trying a take a picture, heard a familar voice behind me. Haa, it was ks who was armed with his camera too. And so we started taking pictures of the fledgings.

The nest belonged to a dove, Shun de said its from the peaceful dove (or zebra dove) as he spotted the parents that day. Arent they adorable? More of these cute birds on Ria's Buloh's bird guide. 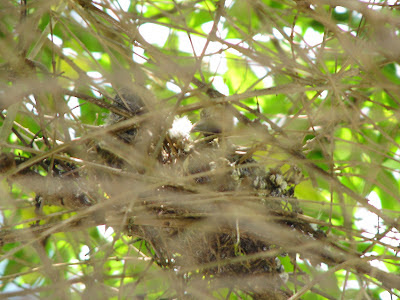 This is my third consecutive day jogging. I'm probably one of the crazy few who jog at midnight, but I particularly enjoy the cool breeze without the blazing afternoon sun. But today I'm more crazy (as lynn would agree with me); I'm jogging with my camera strapped on my back.

I had first seen the black-crowned night heron a few months back when I was loitering about the neighbourhood at night, trying to memorise stuff for the exams. Did a post on that but sadly its gone when I accidentally deleted my whole blog last time together with other of my nooby first postings.
Surprisingly, it wasn't that hard to find them this time. I had previously tried looking for them again about 8-9pm but barely find any. Saw about 6 of them as I jogged past the small canal but they were pretty attentive and flew off before I even came close. 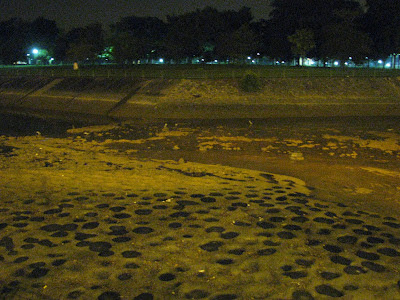 At this big canal (overlooking punggol park) however, saw about 10 plus night herons clustered at this clearing and were pretty unperturbed with my presence. I then whipped out my camera and attempted to take some shots. Turned out that all of them were dark before I thought of adjusting the ISO. haa, me amateur sorry. People walking past me was probably wondering what the hell I was doing, but well, I'm used to it already. 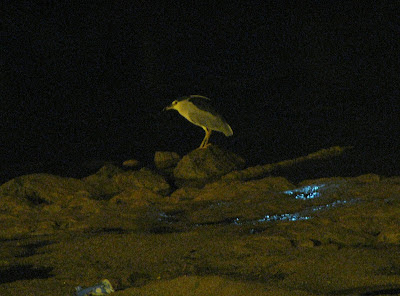 Heres the only decent picture (of my standard ;p) of a black-crowned night heron I got. As the name suggested, they hunt at night and they are easily distingushed by the smart blackish upper sides flanked by two tails of white feathers extending from their head. More info can be seen from Ria's Sungei Buloh's guide. 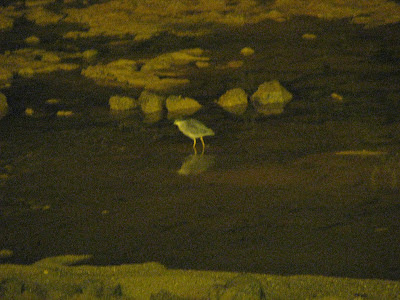 Besides the night heron, I also saw other birds which I din really expect them to be active at night. The Striated Heron... 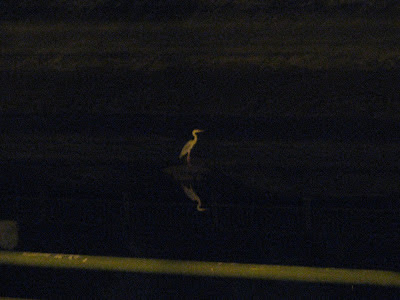 And what looked like a grey heron?
I was pretty lucky that the water levels are low today since this will favor them to come out to feed. Hopefully will observe more interesting stuff on future jogging trips. =)

This is part of my geography module, which involves designing a poster on three plants in NUS. A pretty rush job and me, diana and justin worked till 3am to finished this! At least thats another project down and I survived this week of madness. Click on it to enlarge and enjoy!

Thanx for again for Wee Yeow Chin and Angie Ng for allowing me to use their photos on the mistletoe!

(Btw anyone know any free software that convert word or pdf to jpg format? my current one places an enormous watermark there...) 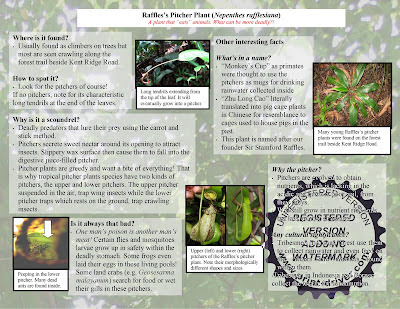 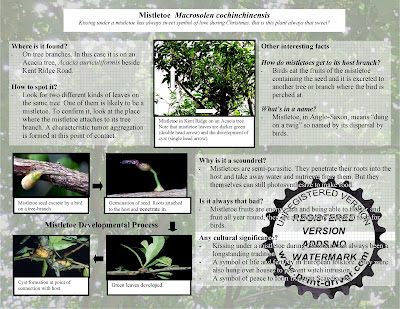 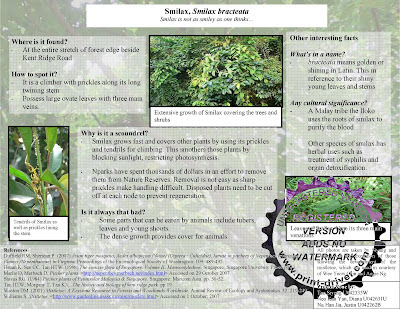 Supposed to have 4 pages that join to form a poster but I removed the first page, which include the map where the plants were located.
Justin: Pitcher plant
Me: Mistletoe
Diana: Smilax
1 comments Labels: Kent Ridge Road