Bako is located at in the state of Sarawak on the third largest island, Borneo. Established in 1957, it is Sarawak's oldest national park and the 2nd oldest in Malaysia. I was fortunate to be able to go there for a recee trip with LK and RY. 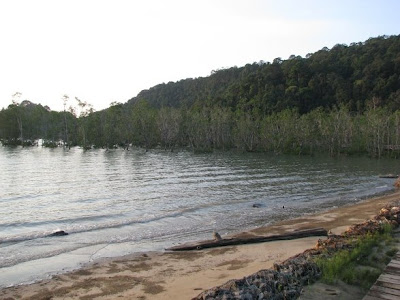 The mangrove here is very different from Singapore. In Bako, you can clearly see the zonations demarcated by mangrove trees while Singapore's mangrove zones were not clear due to the lack of area. In the day, due to the sparse arrangement of the trees, we were able to spot many birds easily. Below is a velvet-fronted nuthatch, Sitta frontalis, an uncommon resident here. 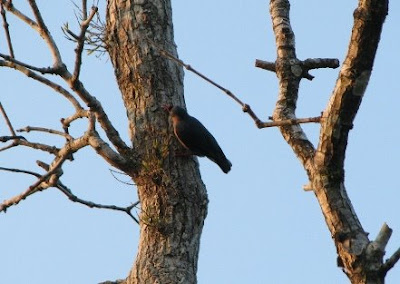 On the mudflats, fiddler crabs were out feeding and courting. This is my first time seeing an electric blue fiddler! 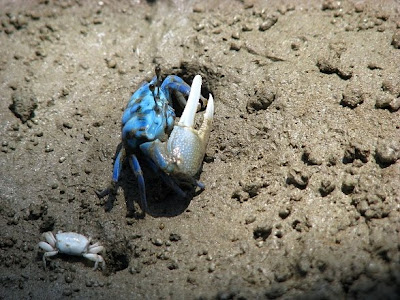 Many people are drawn to Bako due to the ease whereby the endemic primate of Borneo, the proboscis monkey (Nasalis larvatus) can be ease in close vicinity. We were very fortunate to see them everyday at long range but on our last morning there they were hanging very close to the mangrove boardwalk feeding on the leaves of Sonneratia. 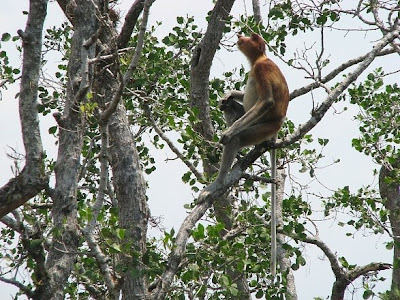 The malay name of the proboscis monkey, orang belanda came about during the colonial days whereby the locals felt that the Dutch had a similar big red nose. 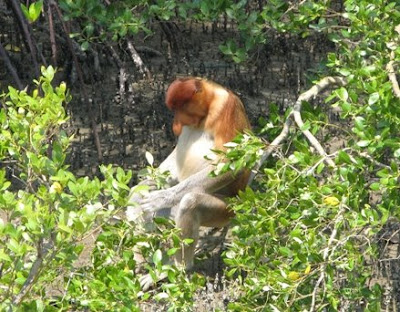 The adult males have a large long nose and a characteristic pot belly. It looked just like an old man with a bulging stomach! 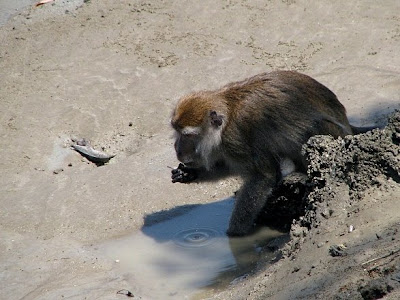 Long-tailed macaques (Macaca fascicularis) are also found in this park. They stalked about the mangrove floor searching for food like crabs to eat on, hence the crab eating monkey. 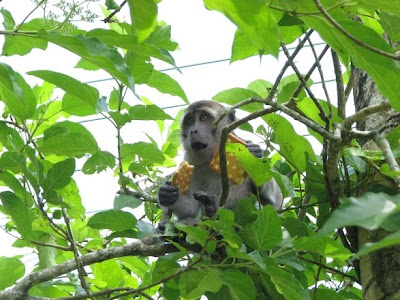 But of course, they were still a nuisance at times, stealing tourists' food whenever they had the chance. This is due to visitors who feed them frequently, causing them to be least afraid of humans. 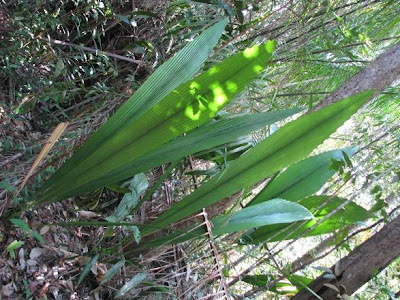 In the lovely dipterocarp forest, we saw rare plants like this giant stemless shuttlecock palm, Johannesteijsmannia altifrons, which stood about 3 meters tall. 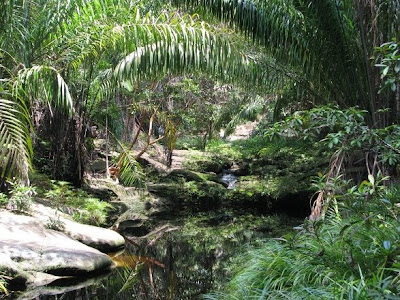 The forest is intersected by several rivers and the riverine vegetation is just as lush and amazing. We even saw a soft-shell turtle swimming about in the river! 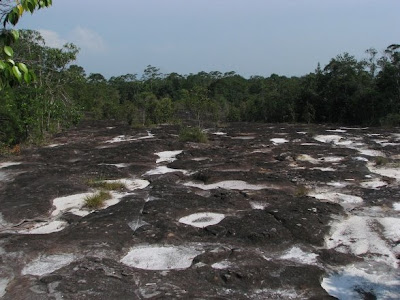 On the plateau was the kerangas, or the heath forest characterized by the sandy and nutrient poor soil. 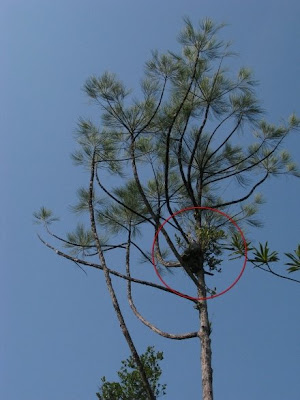 One of the notable plants there were several species of ant plants. These plants have swollen stem bases full of chambers inhabited by ants. 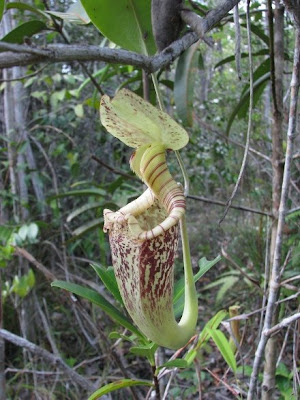 About six species of pitcher plants were found in Bako. Among them are the Nepenthes rafflesiana (top), gracillis and ampullaria which can also be found locally. 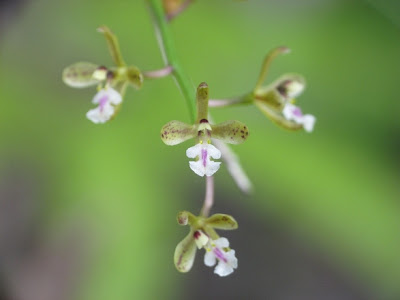 RY also managed to find a beautiful epiphytic orchid besides all the pigeon orchids, Dendrobium crumenatum, which were found everywhere in this heath forest. 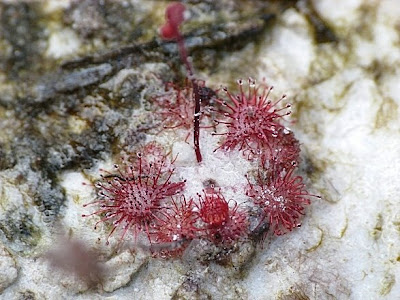 The Borean sundew, Drosera spathulata is another carnivorous plant that can be found here. The leaves grow in a rosette with the flowers extending out from the middle. The hairs on the leaves is covered by droplets of sticky fluid which trap insects. 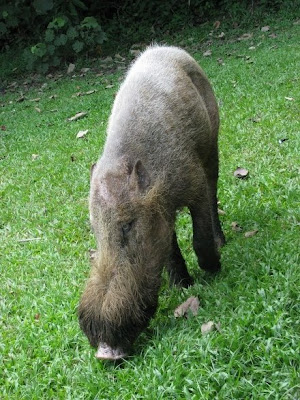 Last but not least, the bearded pigs, Sus barbartus can be seen more than often around the headquarters digging for food under the soil.

This is a backtrack to my previous entry which I accidentally deleted a long time ago. Alas, but now is the appropriate time to rewrite this entry again, since I have just returned from Sarawak, together with a few sightings of some of these wonderous plants at Gunung Gading.

Most people recognise the world's largest flower as the Rafflesia. In actual fact, there are a few more specific definitions for this and the Rafflesia is termed as the world's largest single flower. This genus of flowering plants are named after Sir Thomas Stamford Raffles who is the expedition leader leading to the discovery of this plant. The Rafflesia is a parasitic plant without any stems, leaves, branches and true roots. Its host plant is a woody vine of the genus Terastigma whereby the haustoria of the Rafflesia penetrate and extract nutrients from them. The flowers are either male or female. 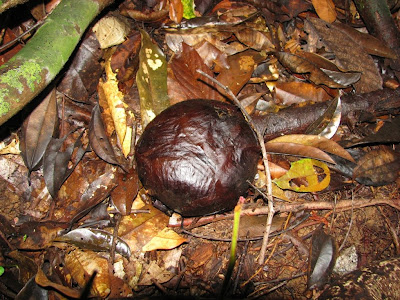 Another largest flower that can be found in Gunung Gading is the Titan arum (Amorphophallus titanum). This plant has the largest unbranched inflorescence. As with the Rafflesia, the Titan arum is also known as the corpse flower due to their rotting smell which attract flies for pollination. Both male and female flowers occur on the same inflorescence. 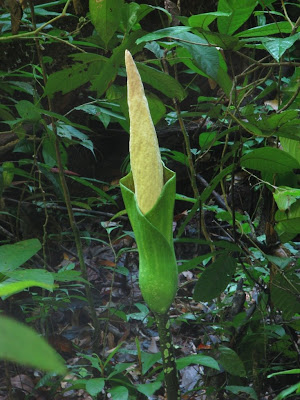 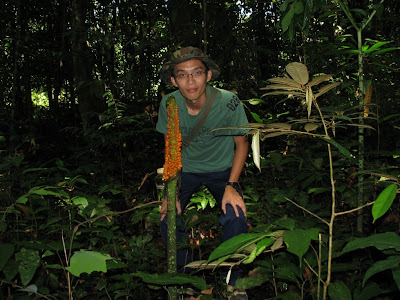 The Talipot palm (Corypha umbraculifera) has the largest branched inflorescence. However, this palm is monocarpic, meaning that it dies after flowering, which occur about 30-80 years. Our botanical gardens has one that flower a few years back, back it was a pity that I missed this spectacular event. 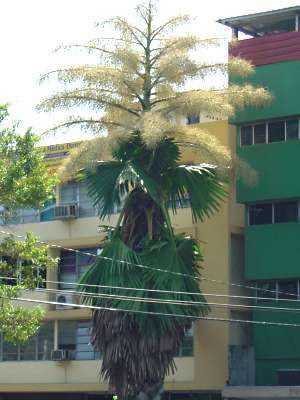