This was my first trip to cyrene and after hearing so many stories and seeing so many blogs about this amazing reef, one will just have to see for himself to believe.

We set off from 1 degree Marina at Sentosa on a boat. Luckily, the owner have a rubber dingy, thus avoiding an amphibious landing. 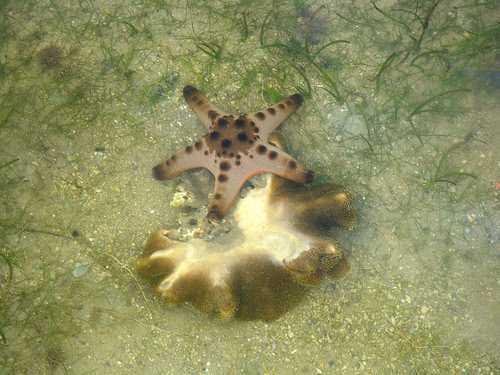 There were really so many knobbly seastars (Protoreaster nodosus) here with many varying colouration, knobs and patterns. RY found this which was feeding on a soft coral. 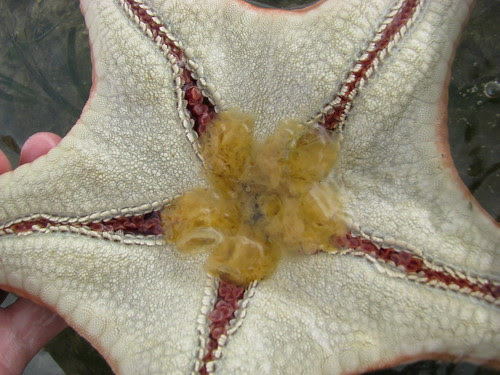 Seastars feed by eviscerating one of their stomachs out their mouth to engulf and digest their prey. I managed to capture one with its stomach extended. It seems like they are also not just carnivores, but we found a few others that were feeding on seagrasses too! 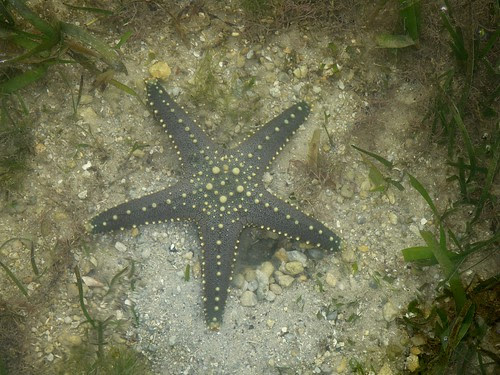 I finally had the chance to see this newly recorded seastar, Pentaceraster mammilatus. As described by some, it looked like a knobbly that have turned over to the dark side~ 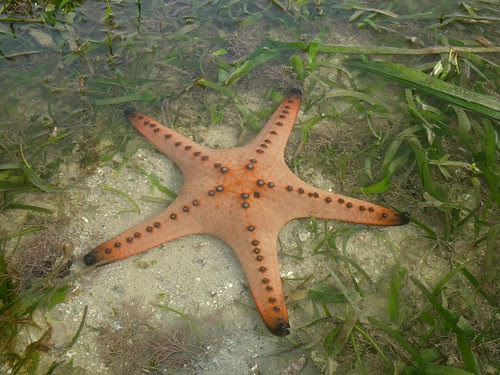 We also found this peculiar star that was highlighted in wildfilms blog last time. To me, it seems like a cross between the knobbly and the Pentaceraster seastar. Who knows? I might just be right~ ^^ 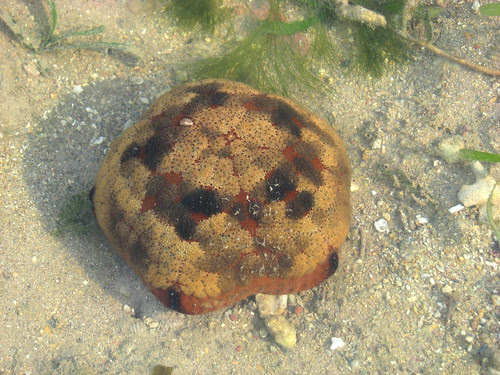 Another star which do not really look like one because of its inflated body. True to its name, the cushion star (Culcita novaeguineae) looks like one that will be a great pillow. 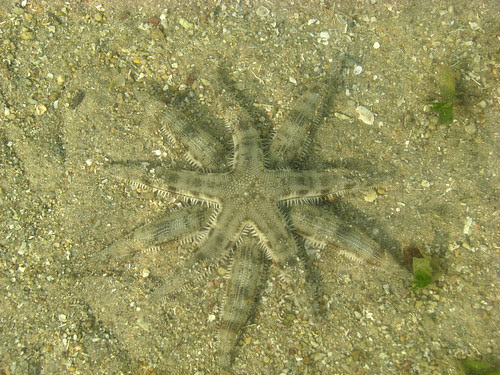 The last species of star that we saw was the common seastar (Archaster typicus), which were scattered all over the sandy intertidals. 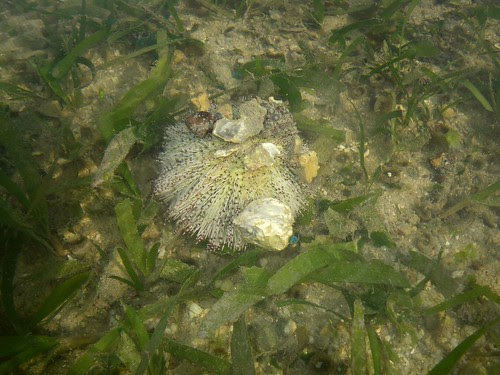 There were also several Salmacis sp. sea urchin. These spiny animals camouflages itself by trapping pieces of debris on its short spines. 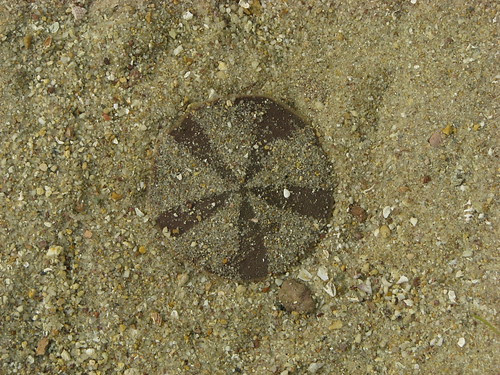 Another common resident here is the placenta sand dollar (Arachnoides placenta). Just like starfishes, these animals also have five lines of symmetry radiating from the center. 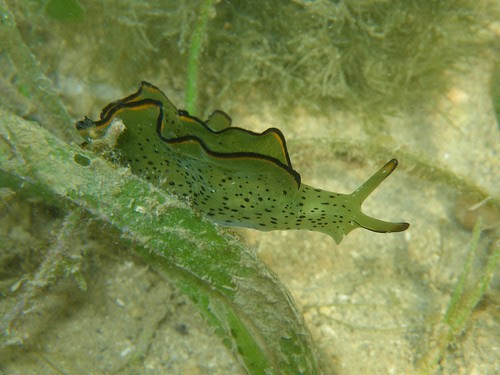 Bryopsis algae is abundance again, and together with it comes the leaf slug (Elysia ornata) which "sap-suck" on them. 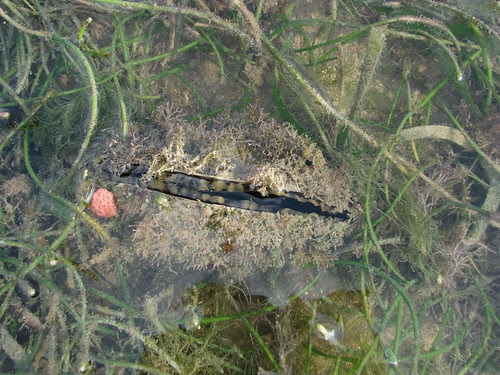 One must always remember not to take off one's booties especially here as there are lots of fan shells (Family Pinnidae) sticking out of the mud. 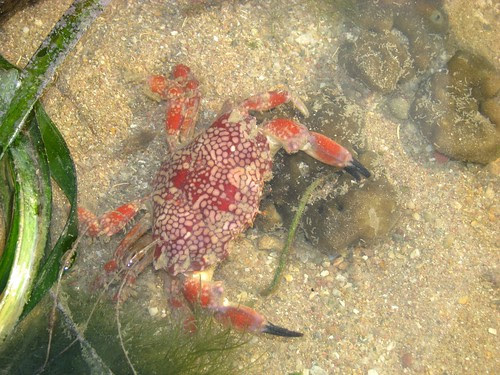 It has been awhile since I last saw this most poisonous crab, a mosaic crab (Lophozozymus pictor). Don't be mistaken that it is an edible crab, even though it might look tasty and cooked! 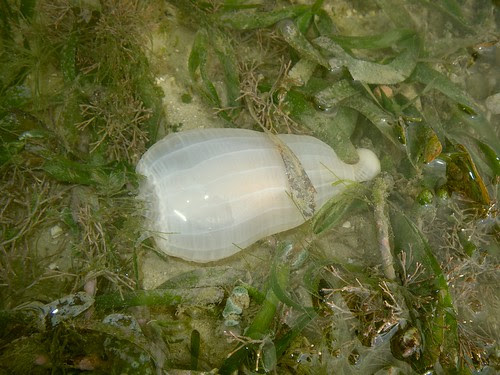 I found this weird looking anemone that seemed to be detached from its burrow. ID anyone? 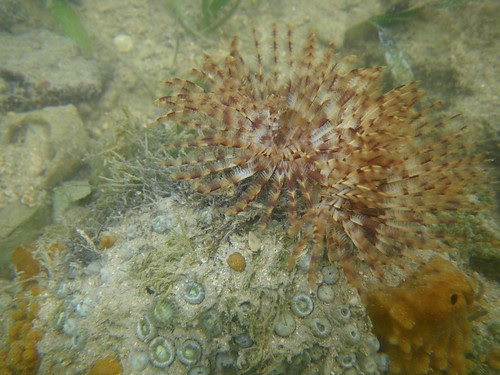 Just before we leave as the tide starts to rush in, I managed to capture this pair of intricate fan worms (Sabellastarte indica). Yes, these are actually segmented worms with their main body burrowed in tubes while extending their feathery mouthparts to filter feed.
1 comments Labels: Cyrene

About a week back (Sorry for the delay but my 5 yr laptop died before I can make this post), some of the RMBR guides went over to the opposite side of St. John's island intertidal which was facing the Sister's islands for a recee trip to see what life does the rocky shore have. 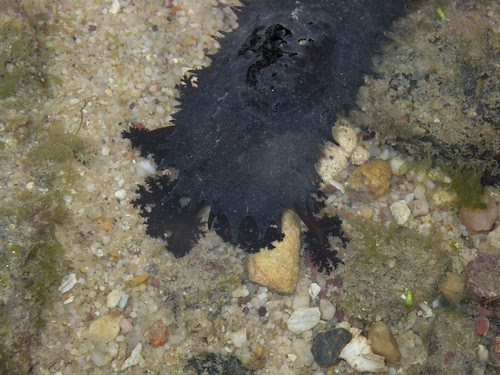 The most common echinoderm there was probably this black sea cucumber (Holothuria leucospilota), which was all over place, especially under rocks. This one was out in a tidal pool, spreading out their branching tentacles to feed on detritus.

Another common resident in this rocky area was this branching anemone, Phymanthus sp.

We also found two lovely Pseudobiceros uniarborensis flatworms. They move and swim by undulating the sides of their body as shown here.

What I initially thought was a mud crab turned out to be a spotted belly crab (Ozius guttatus) because of its polka dotted underside. Just like its cousin, it is also armed with powerful crushing pincers to feed on shelled molluscs. 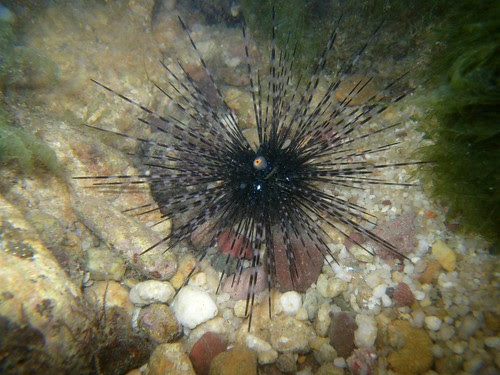 We also found several Giant Top Shells (Trochus niloticus) hiding between the rocks. These huge snails were collected for food and when polished, their beautiful shells are used for ornamental purposes and for making buttons.

Diamond Wrasse (Halichoeres dussumieri) has a thick lip which hides a extendable jaw that can jut outwards for feeding purposes.

Here is a pretty calcareous red algae (Tricleocarpa sp.), among the many species of seaweeds that can be found in this area.

I saw this pair of intricately designed oysters, Alectryonella plicatula. According to our molluscs expert SK, this is one species that can be eaten.
0 comments Labels: St. Johns

Today, we had a short exclusive intertidal walk with some journalists from the Asian Journalism Fellowship. 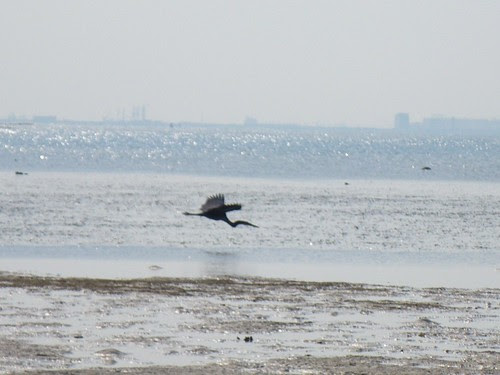 The tide was still high when I reached the intertidal to hunterseek. Two great billed herons (Ardea sumatrana) were feeding at the seagrass lagoon and one spread out its magnificant wings and flew off as I approached.

It has been awhile since I last saw a blue spotted fan tailed ray (Taeniura lymma). This stingray, upon seeing me, quickly buried itself under the sand. You can still see the outline of its body on the left side of the photo.

I found this swimming crab that have an extremely soft shell! It must have just newly moulted.

This snail is one of our favourite local seafood delicacy, the Gong Gong (Laevistrombus canarium).

The anemone shrimp (Periclimenes brevicarpalis) makes its home on the sea anemone, scavenging on any food on this cnidarian. It is even known to nibble of their tentacles if they go hungry!

Male fiddler crabs have a very much enlarged pincer for attracting their opposite sex and fighting. Notice how big this porcelain fiddler crab's (Uca annulipes) pincer is compared to the left pincer which is used for feeding.

Last but not least, the synaptid sea cucumber extend its feeding tentacles to filter off any suspended food at the seagrass meadow.

Later in the evening, Swee Cheng from TMSI gave an enlightening lecture about sponges for the Project Semakau volunteers. His BP book on Singapore sponges will be out soon this month so watch out for it!
0 comments Labels: Semakau