Staying at home for the past 2 days really makes me think of alot of negative things. Some things were just not the same again. Haiz... Anyway, some sunshine finally showed out today so I went out for some exploring again. I went into this restricted forested land near NUS (yes, I trespassed again) to see if there’s any interesting stuff inside. Definitely very wild place in there with lots of creepy crawlies. Although there’s a trail present, I kept walking into thick strings of cobwebs. But I saw one large black bird the size of a hen. Not sure what bird it was, will consult dingli when he’s back from KL. However, I was quickly turned off by those nasty mosquitoes. In just 20mins I have 15 bites all over my arm! The last straw was when an insect flew and smack right on my cheek. Gee :S I quickly turned back and walked to NUS. But think there’s much to be discovered there. Will go back next time with some insect repellent. 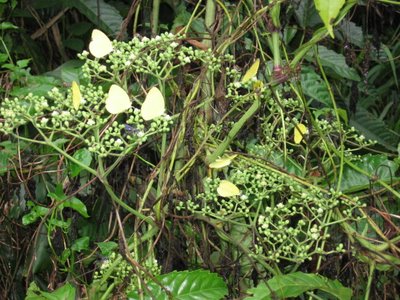 A nice view was this plant inflorescence of the plant Leena indica, which attracted many of these yellow butterflies and some flies and wasps. 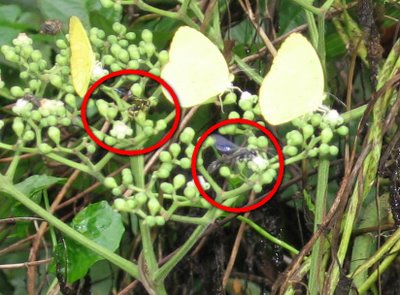 Enlarged picture. A black wasp and a yellow jacket (left circle, body with yellow strips)? A tiny black fly on the extreme left centre.
Back at NUS, I found this orchid with beautiful white flowers on a tree. I had been suspecting that those epiphytes were orchid plants and today finally confirmed it after seeing the flowers. Its pretty surprising for me that there are actually wild orchids in abundance all around. A check on the net actually reveals that it is the most common orchid in Singapore =_=''. It was said that many of them were planted intentionally by authorities to encourage their growth. Also they bloomed when there was a sudden drop in temperature of at least 5.5oC (remembered Prof Loh saying that). All this raining probably cos their blooming now. Anyway, I went to LSlab2, thought of saying hi to Mrs Ang but sadly she was on leave. But I took some Helianthus annus seeds from another lab tech for girl who want to grow them. 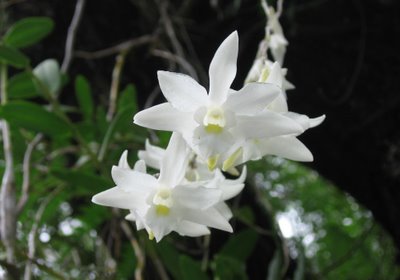 Pigeon orchids, Dendrobium crumenatum on a tree near science canteen
It was still early so I thought of taking a walk at Kent Ridge Road, where I visited during one of the Biodiversity lab sessions two years back. It turned out to be a rather pleasant walk. 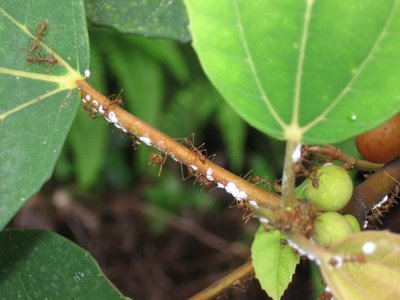 Red ants harvesting from scale insects
There was this clearing where there was a great view of the forest till King Edward hall and Pasir Panjang wharves. It was here that I heard the crowing of a cockatoo and found it perched high up a tree. Three swallows were also gliding in the sky like tiny aeroplanes. A pink-necked green pigeon came flying on the canopy of another nearby tree. This is my first time seeing it and the its colorful plumage is really amazing. Walking down the road, there was a sudden disturbance at the trees and I saw another large bird in brown and black streaks flew quickly past. Wow...can't catch much of it so dun think can identify. 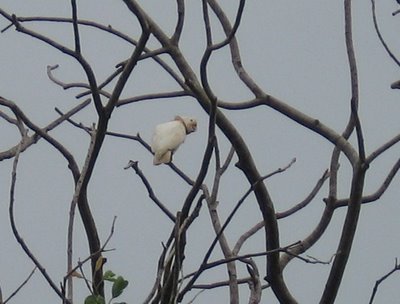 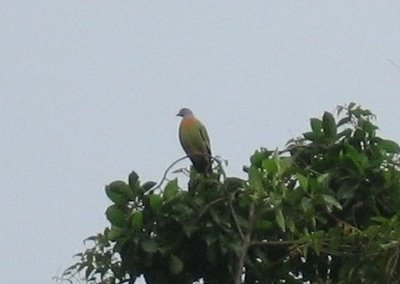 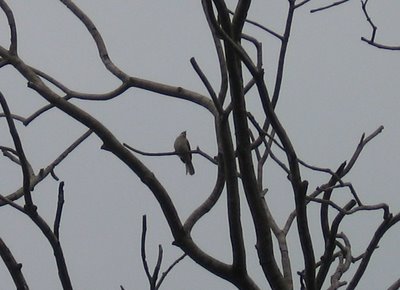 Another unidentified bird
There was a pathway leading down to the Medical blocks and at the medical garden, I found out that there were actually mistletoes growing on the weeping willow. 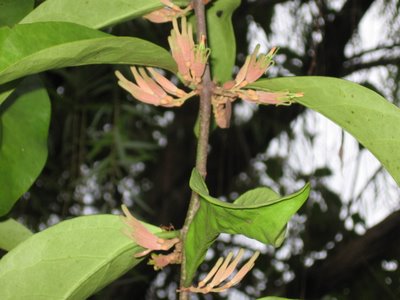 inflorescence on a mistletoe growing on weeping willow
An intial wasted trip to the state land turns out to be not bad at Kent Ridge road instead. At least my mood improved slightly after this trip.
Labels: Kent Ridge Road, Singapore Poly Forest