Wow, its indeed refreshing to smell the fresh seawater and the open sea. This will probably be the only time I can afford to go for more trips before my exams. hai..
Sekudu is one of my most wanted to see offshore islands, mm, mainly becos of the frog boulder (will talk abt it later). It lies close to Pulau Ubin and in visible range to Chek Jawa. Heard fr Ron that this trip was planned for the Republic Poly sea cucumber team who wanted to have a look here. 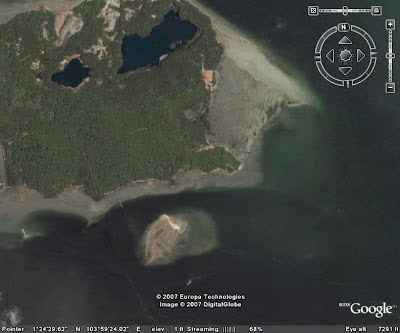 Some satellite images from Google Earth, showing the tiny island Pulau Sekudu at the South and part of Ubin up North with CJ at the East side of Ubin. 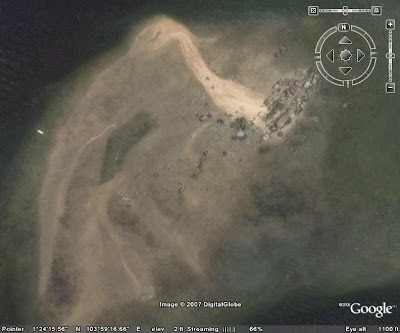 Scaling up, the place looks barren and practically lifeless, with only some large boulders visible. Well, but as the famous saying always goes, we shouldnt judge things by its surface. The frog island is teeming with life too. 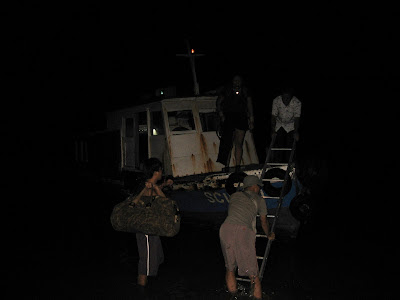 Sun was not up when we reached, which me and Dickson was rather unprepared for (no torches). Luckiy Alvin lend us one and also the sun came soon after. 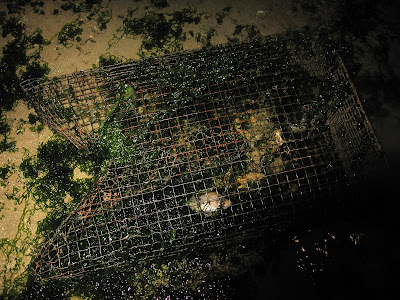 The first thing that caught my attention is this abandoned fish trap left there. On closer inspection, a dead file fish was found. Theres a live thunder crab in there too! 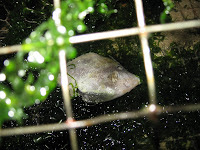 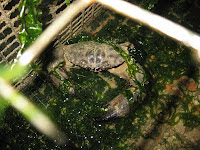 Ria suggested getting it out and we managed to get a small opening from the wire mesh. Then came the great battle as Ron tried to poke the creature out with the metal chopsticks. The ungrateful crab, kept snapping at Ron and Alvin but finally it was out, but still pretty tramatised, with its huge crushing pincers up and ready for another round of fight. Think that picture will be seen in tidechaser, wildfilms or blue heaven's blog soon. 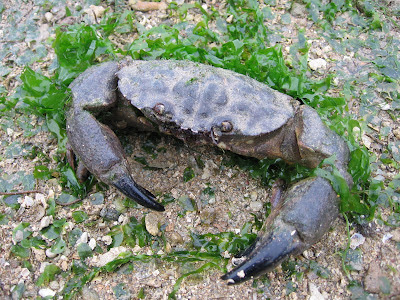 Haiz :( Here was when I lost grip of my cam and the flash is gone..... My trusty compact cam.... Perhaps its an indication I should change to a new one. But still rather depressed abt it. +_+'' The pict above was taking later without flash and after the crab had calm down. 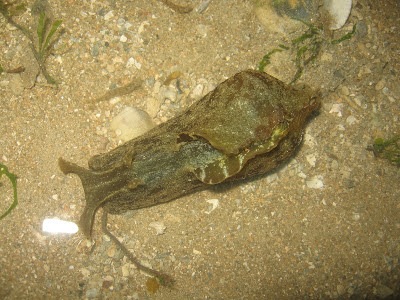 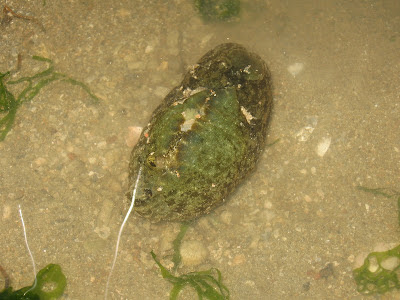 Another one that Alvin found wrapping itself tightly. Some strange yellowish insides sparked Ron's curosity. 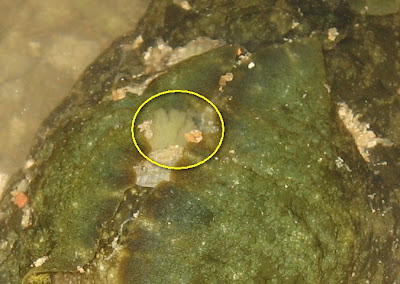 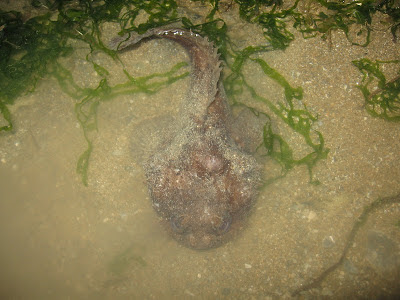 A toadfish, in the same puddle with the seahare. Alvin tried to make a film of toadfish feeding by dropping a fish into the puddle but apparently it had no appetite that time, even wen we tried maneuver the fish towards it using the multi-purpose chopsticks (sux, still cant find where sells it). 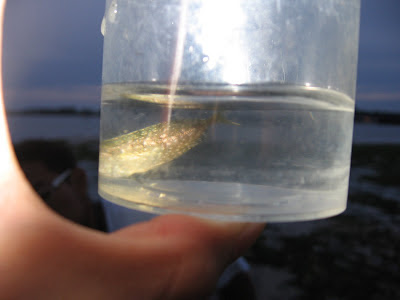 fish bait for the toadfish 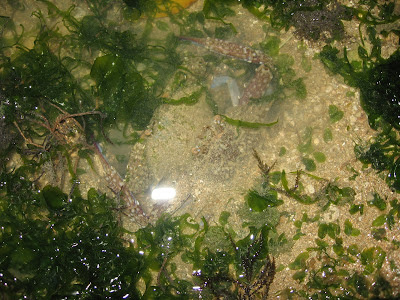 A pair of mating flower crabs just beside the seahare too. 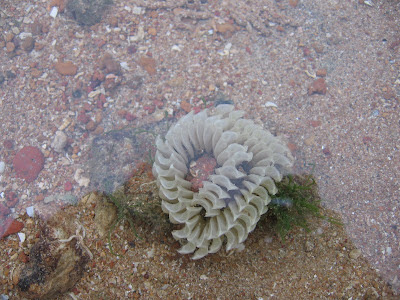 Egg capsules of spiral melongena? Looks like it, with the notched tips. 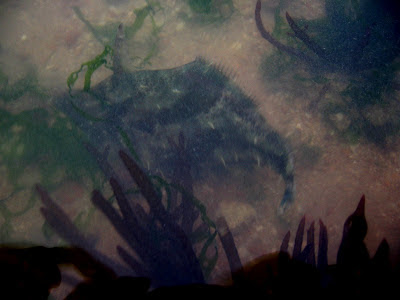 A rather hairy filefish or leatherjacket. They were named due to their rough skin. 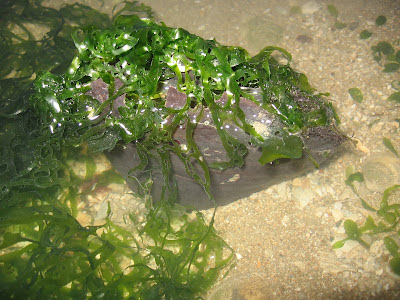 Fan Shells seems to be very common at sekudu. This bivalves have much of their tapered ends in the sand with only their razor sharp mouth sticking out. This is one sure reason to tell pple to wear footwear when visiting the intertidals. :) 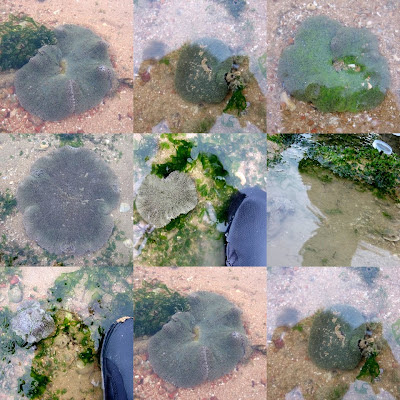 Healthy signs of recovery. All the carpet anemones are looking well. And spotted quite a few miniature size baby carpets (placed my booties beside for a size gauge). Ron mentioned about the wealth of pencil sea urchins, blue sponges, nudibranchs before the freshwater impact from johor straits. Pity can't see them now.

Din really go all out to search for interesting stuff today cos kept fiddling with my camera to try to get it working. But as with all trips, always have a first time, like the seahare, filefish and crabs having sex. 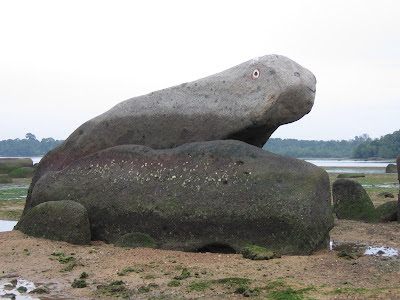 Being my first trip here, of cos, I must pay a visit to the iconic frog statue in Sekudu. Pulau Sekudu, also known as frog island, is said to be named due to a swimming competition btw a pig, elephant and frog to reach Johor. All 3 animals did not make it and the frog turned into sekudu while the other 2 form Pulau Ubin. 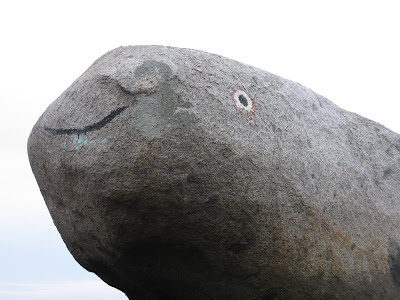 Such a broad grin :D Sometimes vandalism does bring abt a sense of identity to a place doesn't it? Just as the "broken soul cliff" at Sentosa too.
And back to shore, where we had a short breakfast at Changi Village and I had to rush back school to prepare for my annual guitar concert. Man, marvellous concert it was (best in my 3 yrs in GENUS), as all the songs are pretty audience-friendly and dramatic. Now I wished I had forced some pple to go for it.

update>> hey my camera's flash is back!!! yeaaa
Labels: Sekudu

Pai seh. Have checked with Ria that day and she said the sea hare is probably not the geographic sea hare. Will be sending a photo to Sea Slugs Forum to check things out, so in the meant time you may want to KIV the ID first in case anyone got misled. Also, Alvin found the sickly sea hare, not me :P

Congrats for your successful concert! :)

heys i saw you and hl walking to the busstop on friday.. i think it was after your concert. drove past you two then i realised.. haha..
sorry i didnt go.. been busy these few weeks.

is the crab calmed down or just simply too tired....obviously he used up quite a lot of energy when fighting to remain in the cage?!... :-)

i just know the story about how pulau ubin and pulau sekudu formed! :)

Managed to get some response from Sea slugs forum and its other users. Apparently, some senior curator of some Australian museum thought that it should be a geographic sea hare, but the forum owner was a little doubtful. So guess the experts themselves can't exactly say for sure. Could this be a new species, I wonder?

It is the holic gold which makes me very happy these days, my brother says holic money is his favorite games gold he likes, he usually holic online gold to start his game and most of the time he will win the cheap holic gold back and give me some holic online money to play the game.

Do you know Asda Story gold? I like it. My brother often goes to the internet bar to buy Asda Story money and play it. After school, He likes playing games using these buy Asda Story Gold with his friend. I think that it not only costs much money but also spend much time. One day, he give me manycheap Asda Story gold and play the game with me.

Do you know Asda Story gold? I like it. My brother often go to the internet bar to buy Asda Story money and play it. After school, He likes playing games using these buy Asda Story Gold with his friend. I think that it not only costs much money but also spend much time. One day, he give me manycheap Asda Story gold and play the game with me.

Good day !.
You re, I guess , perhaps very interested to know how one can reach 2000 per day of income .
There is no initial capital needed You may start earning with as small sum of money as 20-100 dollars.

AimTrust is what you thought of all the time
The firm represents an offshore structure with advanced asset management technologies in production and delivery of pipes for oil and gas.

Its head office is in Panama with structures around the world.
Do you want to become a happy investor?
That`s your chance That`s what you really need!

I`m happy and lucky, I started to take up income with the help of this company,
and I invite you to do the same. It`s all about how to choose a proper companion utilizes your funds in a right way - that`s the AimTrust!.
I make 2G daily, and my first investment was 500 dollars only!
It`s easy to join , just click this link http://cahuzuki.arcadepages.com/tahofug.html
and lucky you`re! Let`s take our chance together to get rid of nastiness of the life

Hello !.
You may , perhaps curious to know how one can make real money .
There is no need to invest much at first. You may commense to get income with as small sum of money as 20-100 dollars.

AimTrust is what you thought of all the time
AimTrust incorporates an offshore structure with advanced asset management technologies in production and delivery of pipes for oil and gas.

It is based in Panama with offices everywhere: In USA, Canada, Cyprus.
Do you want to become a happy investor?
That`s your choice That`s what you wish in the long run!

I`m happy and lucky, I started to get income with the help of this company,
and I invite you to do the same. It`s all about how to choose a proper partner who uses your money in a right way - that`s the AimTrust!.
I make 2G daily, and my first investment was 500 dollars only!
It`s easy to join , just click this link http://atyjyneryt.lookseekpages.com/voxigu.html
and go! Let`s take this option together to become rich