Not a good day to go out as NEA said showers at Sentosa in the evening. But the urge to go Sentosa where I had a great time during the seagrass transect a few months was too hard to resist. Yup, I'm not here for underwater world or play beach volleyball. My good friend fiona tagged along to lend an extra pair of eyes. 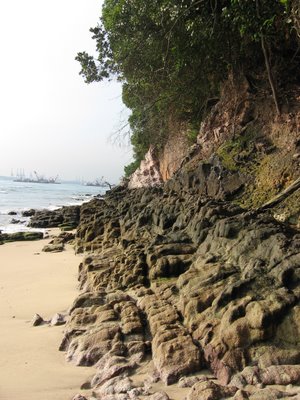 The tide was high at 5.00pm when I reached so we couldnt explore the corals. Thus we took a lesiurely walk down the beach. I found that dead fallen log where my seagrass teammates hanged our bags over the branches last time. The underside of it were littered with snails, probably because that area were still moist. 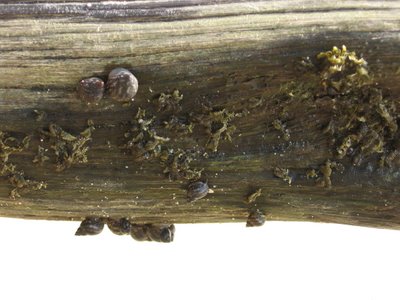 We walked towards to this interesting rock formation, where one area of rock were completely eroded from the cliff, creating a small narrow pathway in between. 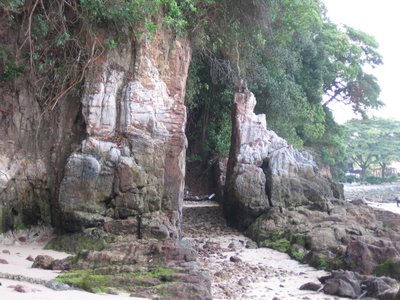 Taken during the last seagrass transect
Over that area, we starting peeping into many of the water puddles formed on the rocks. 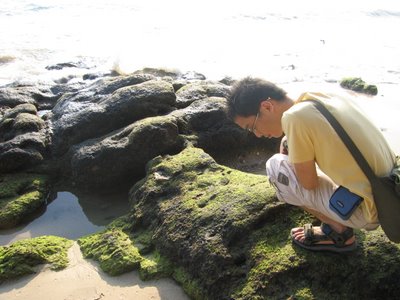 Of cos as an amatuer, we din get much discoveries. But we did found some: 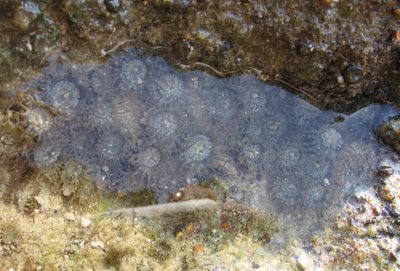 Sea anemones! Lots of these tiny cindarians in the puddles. 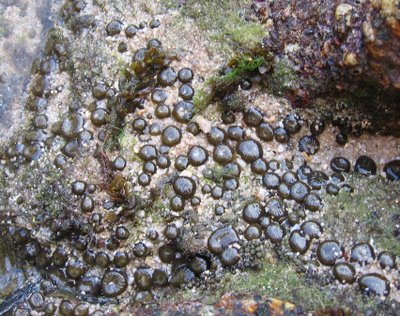 But their tentacles disappear and body wrapped around being out of water. 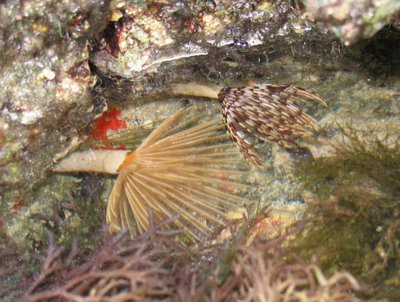 Fan worms! Wee.. looks like two different kinds showing off their tentacles. They filter feed using those "feathers". This is done by tiny cilia on the tentacles which generate water currents through it. The tentacles can regenerate again if it was biten off by predators. The body of the worm is hidden inside the tube for concealment and protection.
And of cos all the Barnacles and Limpets stuck on the rock surfaces 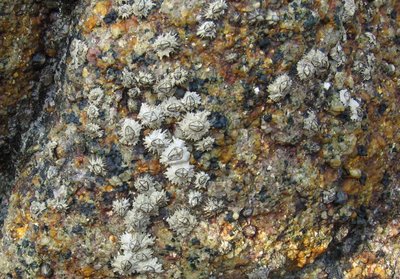 Star barnacles and limpets
It will be an injustice to my Life Form and Function lecturers if I don't mention the operculum of snails! They were used to seal its opening from predators from reaching its soft body. 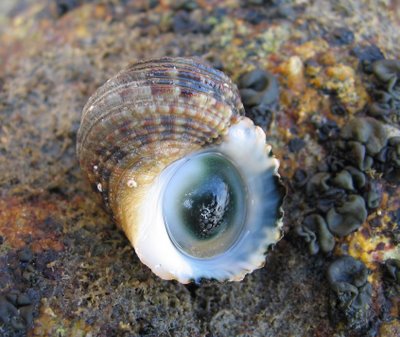 rounded and tough operculum of the turban shell (Turbo bruneus) 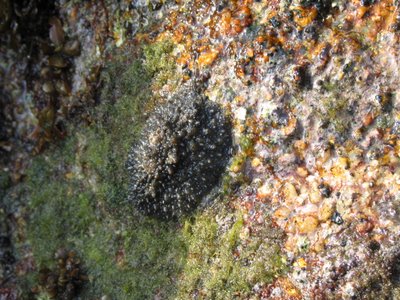 Lots of this seaslugs around. They look like the more terrestrial type with thicken skin 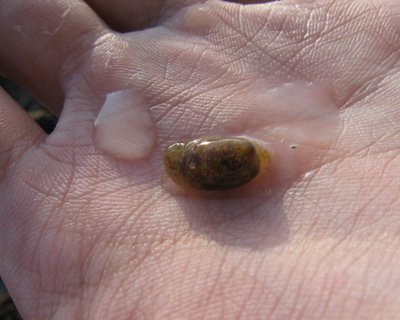 Not very sure but this looks like a hoof-shield limpet as it had a small elongated shell hence not a slug
Gosh, seaweeds were the most lot around. How to differentiate seagrass from seaweed? Look at the later paragraph ;p 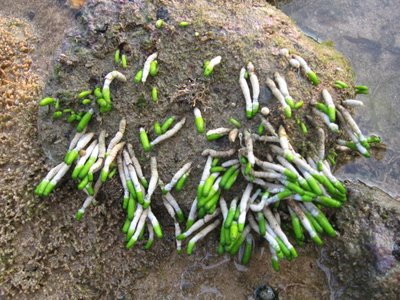 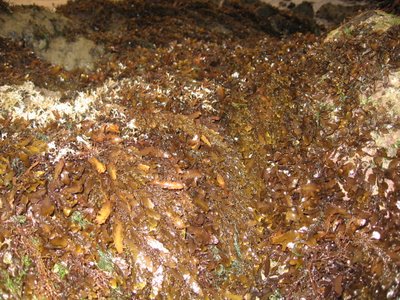 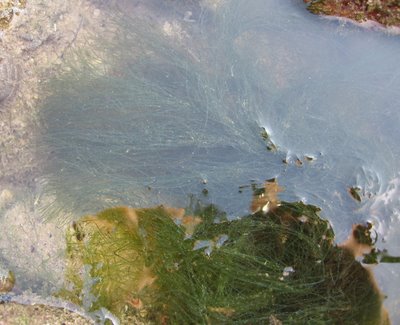 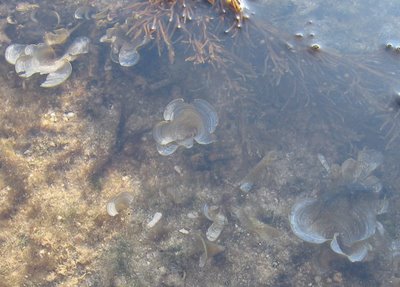 Mermaid's fan
Woa, seagrasses! hehe, I can even memorise their scientific names. Halophila ovalis and Enhalus acoroides. As I remembered, Siti and Ria said during the seagrass orientation that this were the only two species thriving here. So now one will know how I identify seaweeds. Cos all the rest which dun look like this two below are seaweeds! haha. 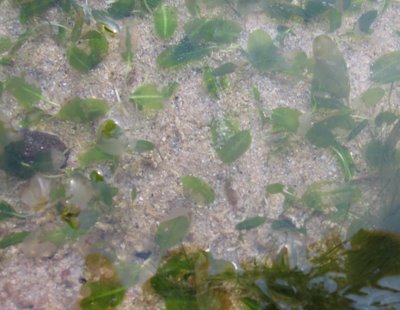 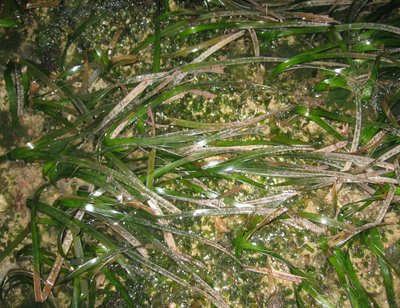 The sickle seagrass, Thalassia hemprichii
Around 7pm, the sun came down toegther with the tide. We then used our lousy torches to start going further down the sea to look for corals. But before that, we saw this: 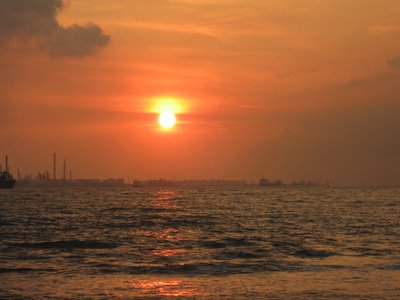 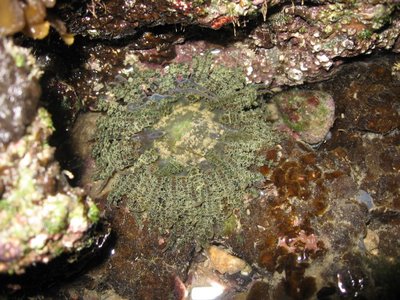 Sea anemones again! But this one was much larger 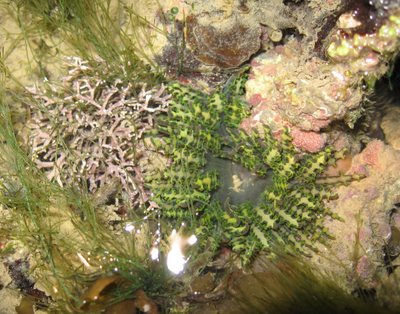 Another one with beautiful greenish tenacles and some seaweed beside 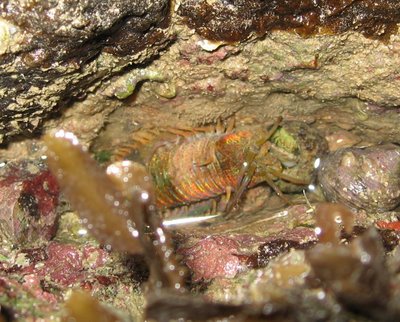 An exciting find by me, a big free living bristleworm! It was as thick as my finger man. These are segmented worms from the phylum Annelid. Some species can also be found nestled inside tubes made of debris due to sticky substances (mucus) secreted by the worm itself. Hence they are also named tubeworms. Tubeworms are sedentary thus hunting mostly by ambush. This bristleworm in the picture is probably an active, mobile predator. Some interesting things are that they have huge mouthparts, or mandibles hidden inside their mouth thus they are fearsome predators. Remembered last time Zeehan showed us a picture of bristleworm mandibles during one of the Semakau training. Gosh… Their hairs are also extremely brittle and thus can break off easily on touch, inflicting great pain. The hairs also contain venom. Thus another name for bristleworm will be the fireworm.
It as a crabby day too and Na found 4 of this reddish crab (red egg crab). It looks like its all cooked and ready to be eaten right? But don't! Its posionous! They were real vicious predators and kept attacking the stick using their claws when I poke it with a twig. Only this one below was more docile, maybe because it was feeding (Look theres something btw its claws). Also saw many hairy crabs halfway inside holes of rocks. 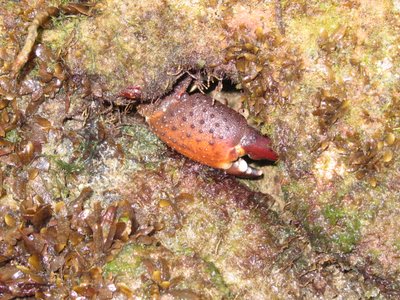 The vicious one. Grr!! 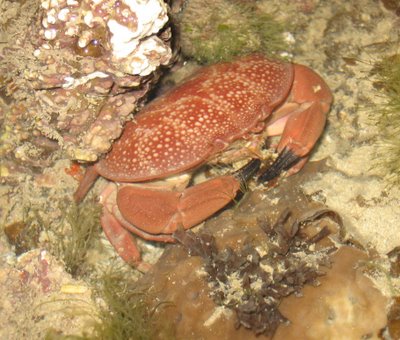 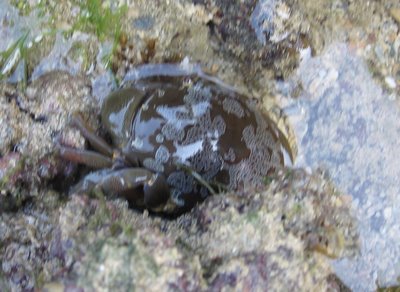 Another crab, the Brown egg crab taken during the seagrass transect last time
And after that, I went further down to use my lousy torch looking for corals. Did not managed find much though. Can't even see a single soft coral. 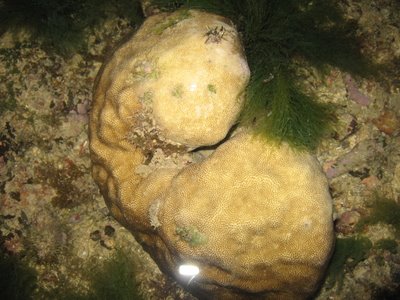 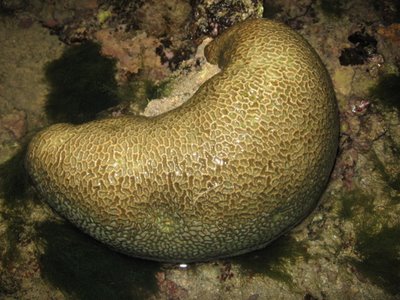 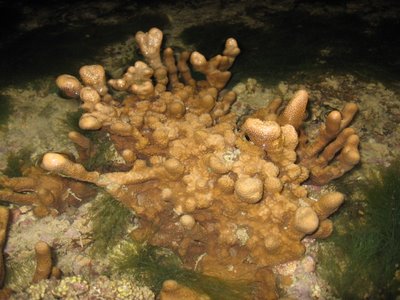 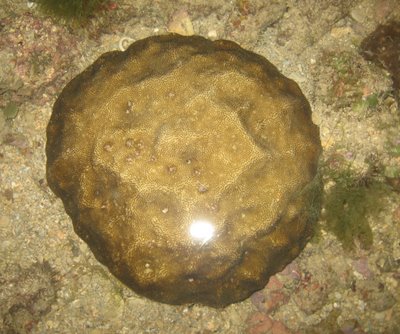 Thats the end man. But I will be back with a vengence with a bigger brighter and better torch. Else it be like today again, relying more on my eyesight to spot stuff... (below). 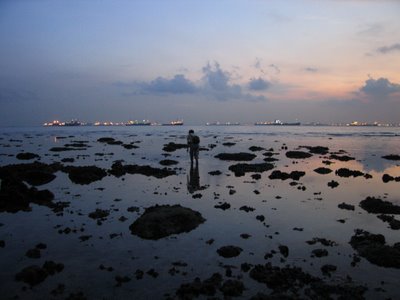 Poor me
What a great adventure this trip was. I'm sure with a few more self-organised trips like this I will be able to make up for the lost OJT trips to semakau which I missed due to school commitments. Anyway I'm having a hard time identifying all those flora and fauna. Any help is appreciated!
Contents still halfway done. Will update it when I have time. Have a bad ache from bending too much today... Any errors pls tell me.
Labels: Sentosa