I had thought, damn! was I jinxed or something? Seems like it had been raining everytime I organise a walk (though this is just the 2nd time ^^). Nevertheless, I still decided to carry on with it though it was still drizzling after an hour of torrential rain.

Today I had the same group of friends from the last Changi Beach trip with the additional of LY, R and two German tourists. Great to show them what our natural heritage has. 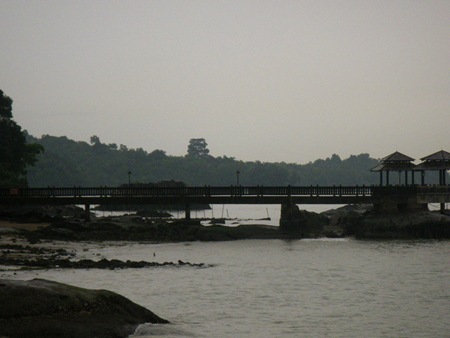 WF had previously told me to watch out for the Pulai tree (Alstonia augustiloba) from the jetty and indeed, this mature elderly tree stood jutting out from the secondary forest canopy. It is believed to be over 100 years old! 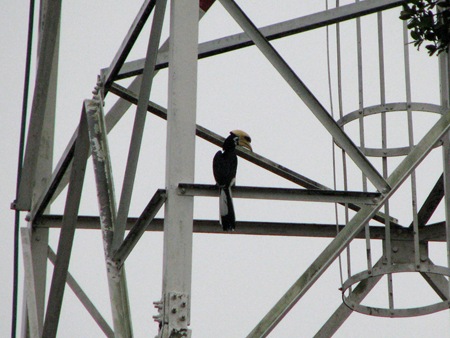 R managed to spot four Oriental Pied Hornbills (Anthracoceros albirostris) just right a few metres up on a coconut tree just as we start with the walk. A pity that I was too excited to whip out my camera till they flew off to a nearby tower. 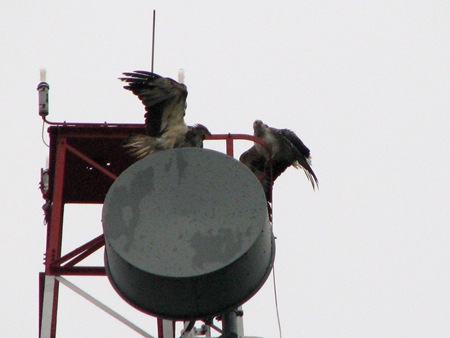 This was when SF spotted another big bird, the White Bellied Sea Eagle (Haliaeetus leucogaster) on the opposite tower. There were a pair perched there before another one swooped down with a show of aerobatic skill to attack one of the two. 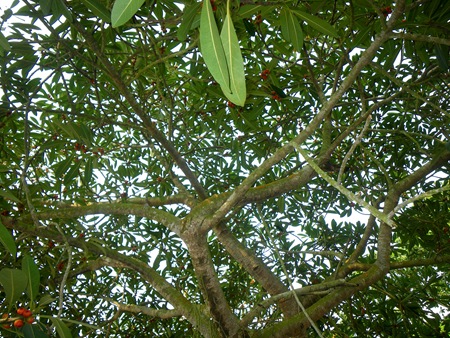 Not a good representation of the plant but anyway, this Fig Tree (Ficus crassiramea) is said to be a rare species found only in Ubin and Tekong. 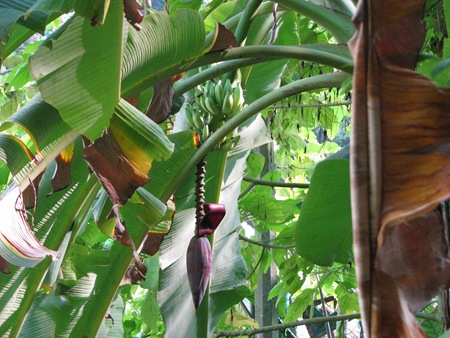 Here is a Banana plant (Musa sp.), not a tree as it is commonly called since it is not woody. A recent study shows that the ripen fruit actually glows brightly under UV light. The compounds come from the breakdown of chlorophyll and it probably aids fruit eaters that see using the UV spectrum. 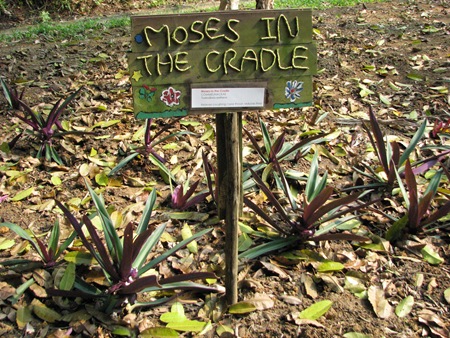 This is a herb with an interesting name, Moses in the Cradle (Tradescantia spathacea). The name comes from the tiny white flowers wrapped in pink bracts resembling a baby within a cradle. This pretty herb with lush green leaves and pink flowers is known as the Jewels of Opar (Talinum paniculatum). It probably has its name from one of the novels about Tarzan, whereby the mythical city, Opar is filled with gold and other riches. The roots of this plant is used as a substitute for ginseng, known as 土人參 in TCM. 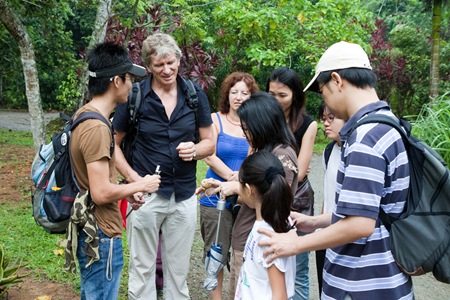 Here is a candid shot by S when SF picked up an Indian Mulberry (Morinda citrifolia) to show me. 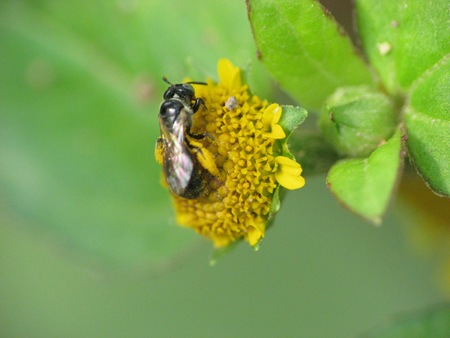 Probably the most interesting plant in the trail is the Toothache Plant (Acmella oleracea). It is used as an anesthetic for gums and teeth last time. One can actually get the feel from it, but to know how exactly it is done, you will have to come down urself to the trail during a guided walk! 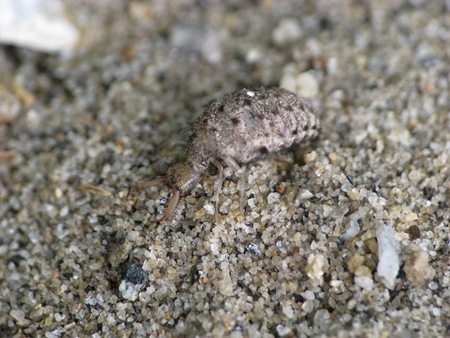 Because of the rain, I was unable to show my participants this interesting tiny creature in the sand. This is the antlion, the larvae of lacewings. They dig a pitfall trap in the sand and using their huge mandibles, snap shut on any small creatures that fall into the hole. 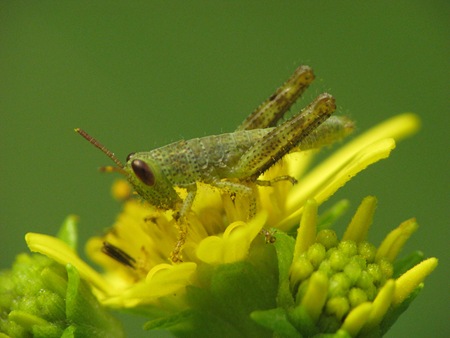 This is another picture taken during my trip here last week too. A grasshopper nymph eating was greedily chewing pollen from the Yellow Creeping Daisy (Wedelia trilobata). Look at the pollen all over its face! 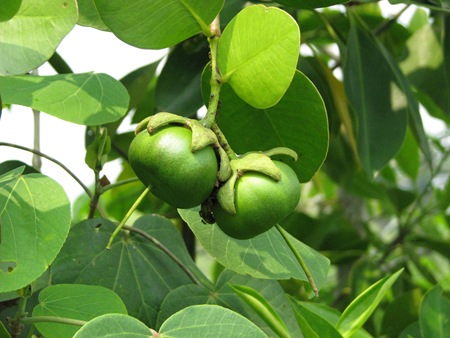 At the mangroves, we saw this rare local mangrove plant, the Mangrove Apple (Sonneratia ovata). These are the fruits that have overlapping calyx wrapping over them, a characteristic of this species. 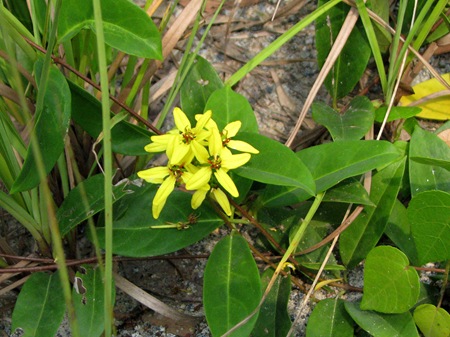 Another plant which I missed out was the pretty Maiden’s Jealousy (Tristellateia australasiae). This is an endangered creeper though it is widely cultivated to beautify hedges in urban Singapore. 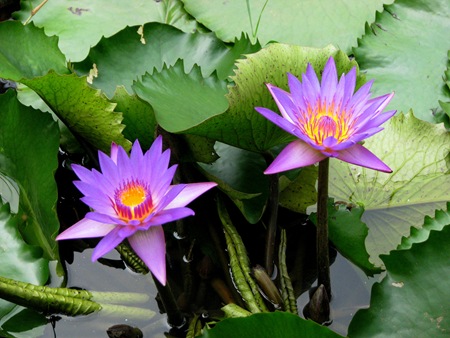 It is a pity that my group missed the full bloom of this Egyptian Water Lily (Nymphaea caerulea). This is a scared plant revered by Egyptians in the past because when the flower opens up in the day, it reveals a bright golden centre set against purple blue petals, symbolising the sun god and creation of life. 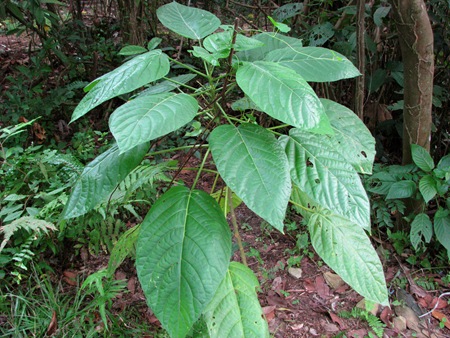 Of course, the trail has more flora and fauna that I did not cover. I will leave that for the next trip here. Nice day out here though we had a perpetual drizzle throughout the entire journey.

Thanks to S for contributing the group photo.

Excuse, the question is removed